A few days ago the New York Times published an article about the German pavilion at the Venice Architectural Biennale. This year the theme was Germany’s open borders; its heartfelt welcome to refugees; and consequent social changes. You may read it here. The exhibition represents open borders by cutting openings into its building. The pavilion’s website provides access to a database of projects for housing the new refugees who are pouring into the country in record numbers. Yet the reviewer notices that “Absent from the database are the voices of refugees or meaningful consideration of what it feels like to live in these spaces, something the curators acknowledge, but attribute partly to the fast-changing situation on the ground.”

The problem of housing the refugees, providing them with a permanent status and a way to seek work and education did not begin with the present crisis, however, as the curators of the Biennale well knew. The country is already crowded with thousands of refugees immobilized by bureaucracy, prevented from working, and isolated from society in facilities that the refugees refer to with the loaded German term “Lager.”

In the pavilion, you will find a selection of photographs by Stefanie Schulz, a young photographer with whom I had the honor of sharing an exhibition, “The Waiting Rooms of History.” The exhibition, at the Kunstverein Paderborn, is open until June 6, 2016. For a year, Stefanie followed refugees in a camp at Lebach. Originally intended as a first admittance facility for brief sojourns of a few months, the camp instead devolved into a long-term residence where some refugees have spent as much as fourteen years. Those who were born here are growing up knowing no other home. While her intimate portraits (you may view some here), do not substitute for voices from refugees themselves, they offer a glimpse into lives in stasis and contradict the idealized vision of Germany’s open arms and heart cherished by many on my side of the Atlantic. Her title “Duldung” means “tolerated” with the connotation of “but just barely,” or “endured.” It is the official status inscribed on refugee’s identity cards until they acquire permanent status – if they do. The feeling goes both ways. The refugees barely tolerate the stasis in which they are forced to live. Duldung is better than nicht geduldet (not tolerated), but in no way does the term mean “welcome.”

Oranienplatz. No remnants of the demonstration remain today.

I visited a refugee in Berlin who has lived for more than three years in a facility in an abandoned school. In 2012, refugee activists themselves occupied the Oranienplatz, a square in the Kreuzberg neighborhood in central Berlin, where they camped out in tents and then wooden huts. The activists were eventually evicted from Oranienplatz; the tents demolished. The activist artist group Bewegung Nurr, built “the house with 28 doors,” a gathering place and resource center. Activists continued to meet there until March, 2015, when arsonists burnt it down. 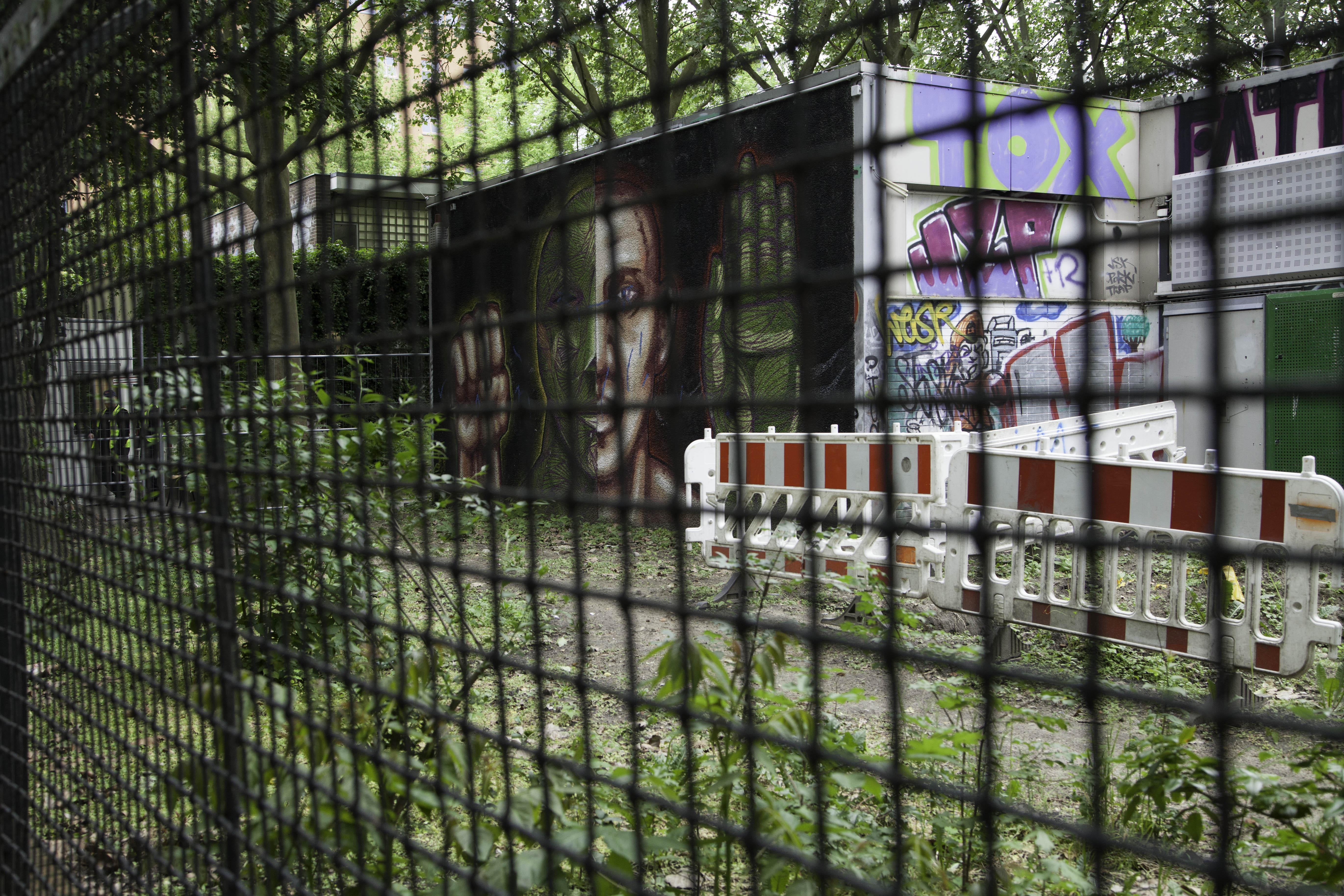 Late in 2012, some of the activists occupied the nearby Gerhardt Hauptmann School on Ohlauer Strasse. The plan was to live there and create a refugee center with facilities for workshops in music, theater and crafts. The refugees demanded access to German lessons, the job market, and education as well as an increased period of “Duldung.” There were several attempts to evict them and many left. But the refugees remaining in the school ultimately won a court order allowing them to stay and for now they remain.

Only residents may enter and leave the building. The ritual of locking and unlocking is repeated interminably. The guard rises from a chair 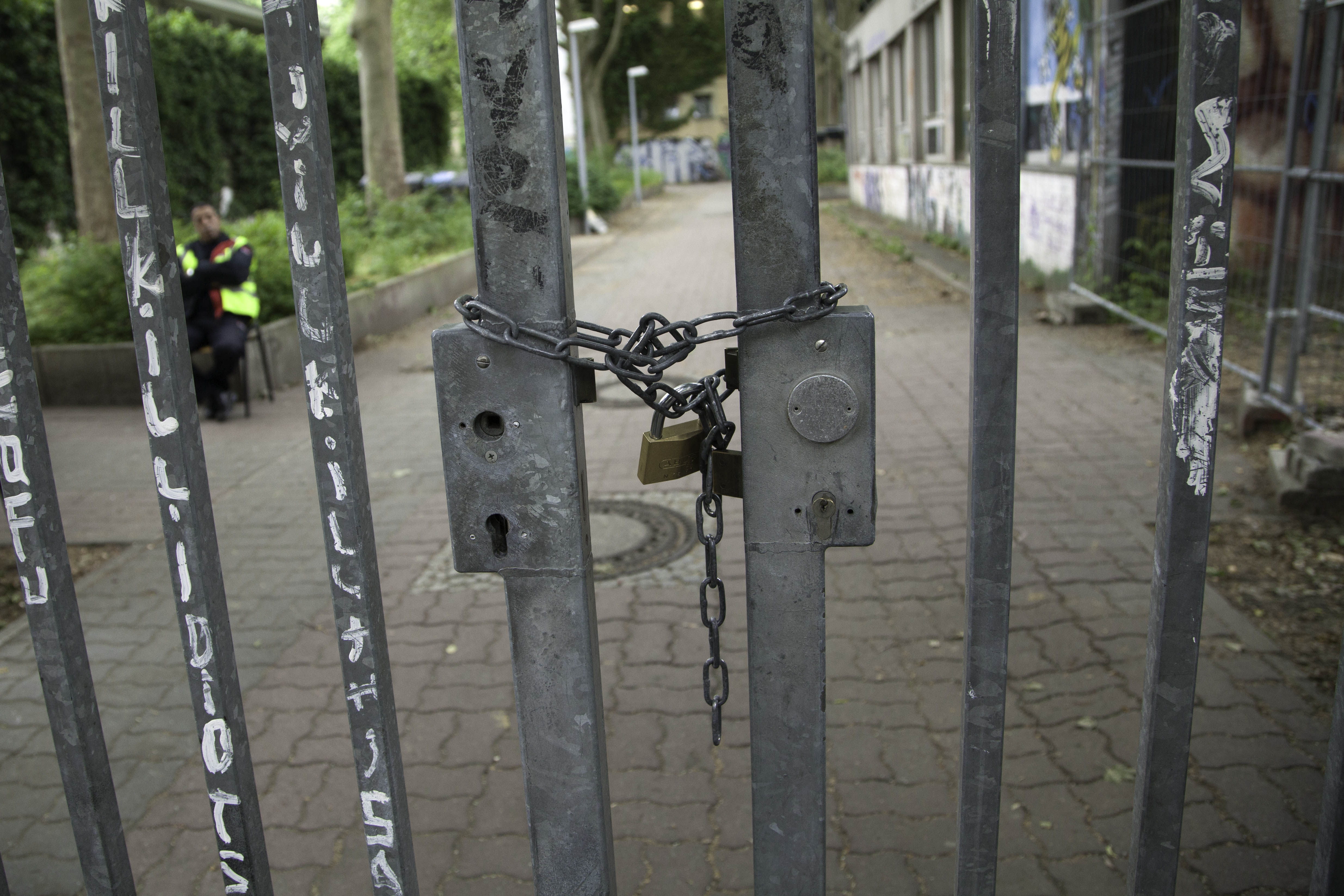 or leaves the guardhouse 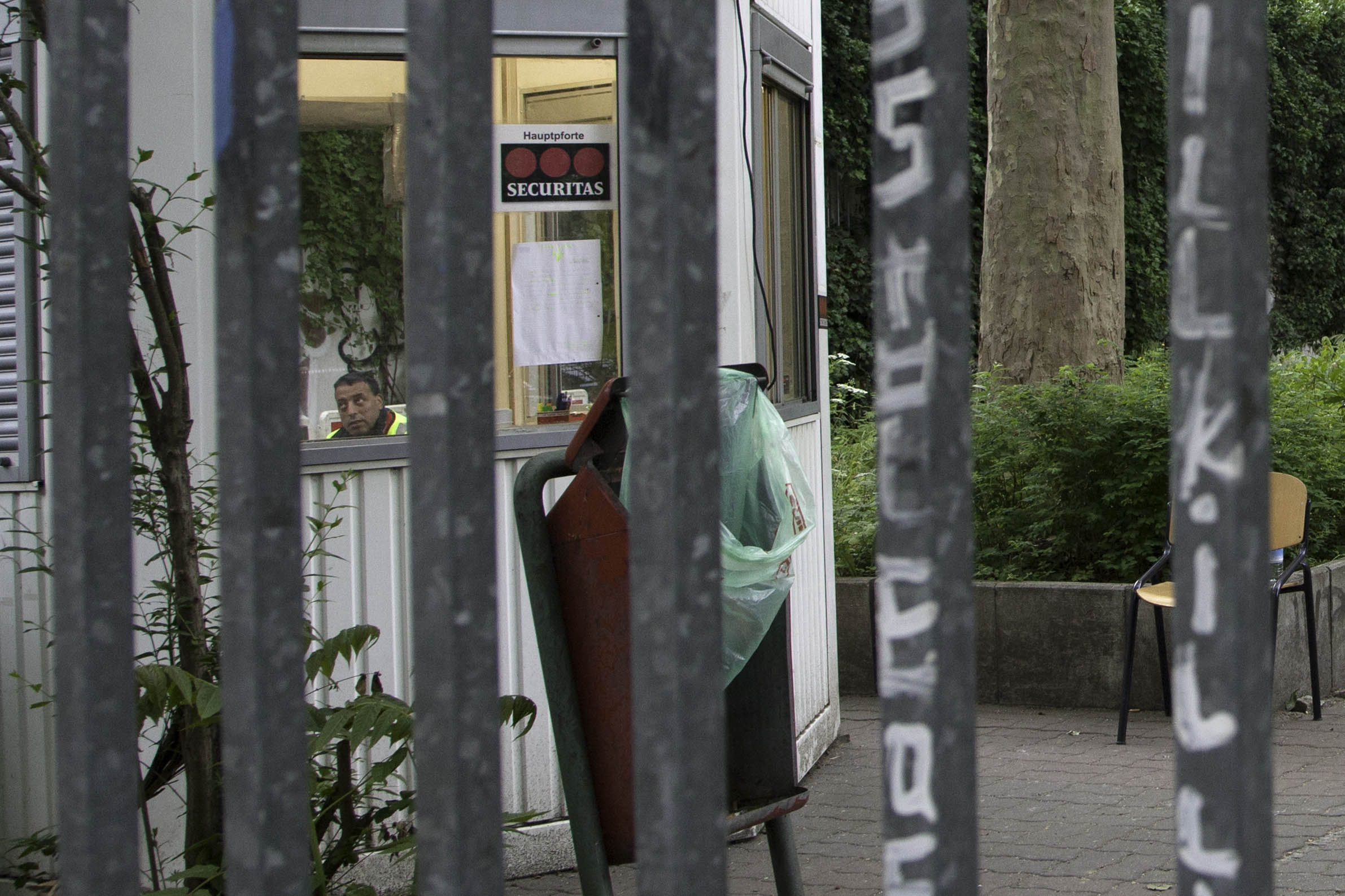 unlocks the gate, locks it up again, and returns to his place.

The rationale for the guards and the padlock is that they protect the residents from skinheads who would break in and attack them.

They also protect the residents from visits by journalists, educators, and friends.

The police were adept at dodging the camera.

If I return long enough to become better acquainted I will photograph the resident activist I met there.

But for now, a portrait of a wary padlock will have to do.

All photographs and texts © Margaret Olin, 2016.

*Thanks to Gregor Wendler for introducing me to the  Ohlauer Schule, Oranienplatz and other significant sites for refugees in Kreuzberg.