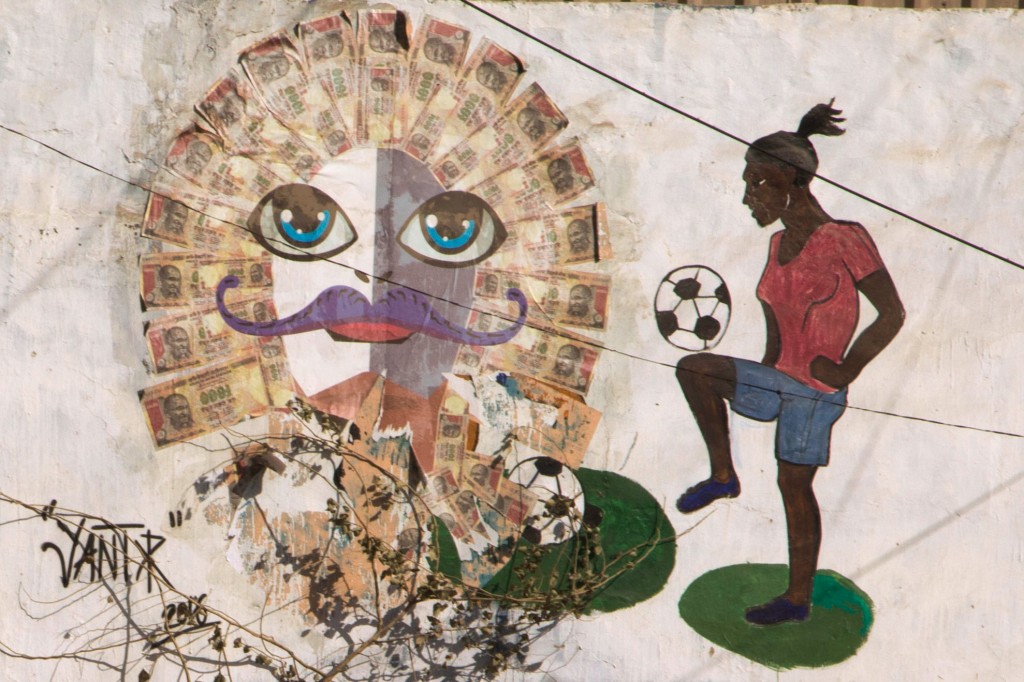 A female soccer player, who once faced another girl playing soccer, now seems bewildered to find herself addressing a mysterious man wearing a halo of banned currency. No doubt the man was intended to be a statement concerning the current demonetization crisis, but his presence left the girls of the Khirkee Collective, who painted the soccer players, in a dilemma. While the artist who painted the man felt no qualms about painting a mural over the girls’ soccer mural, the collective has a code that forbids them to paint over the work of another street artist. The mustached man must remain and so must some offensive graffiti to the right of the mural. The girls made a plan to rescue their mural another way and met a few Saturdays ago to implement it. 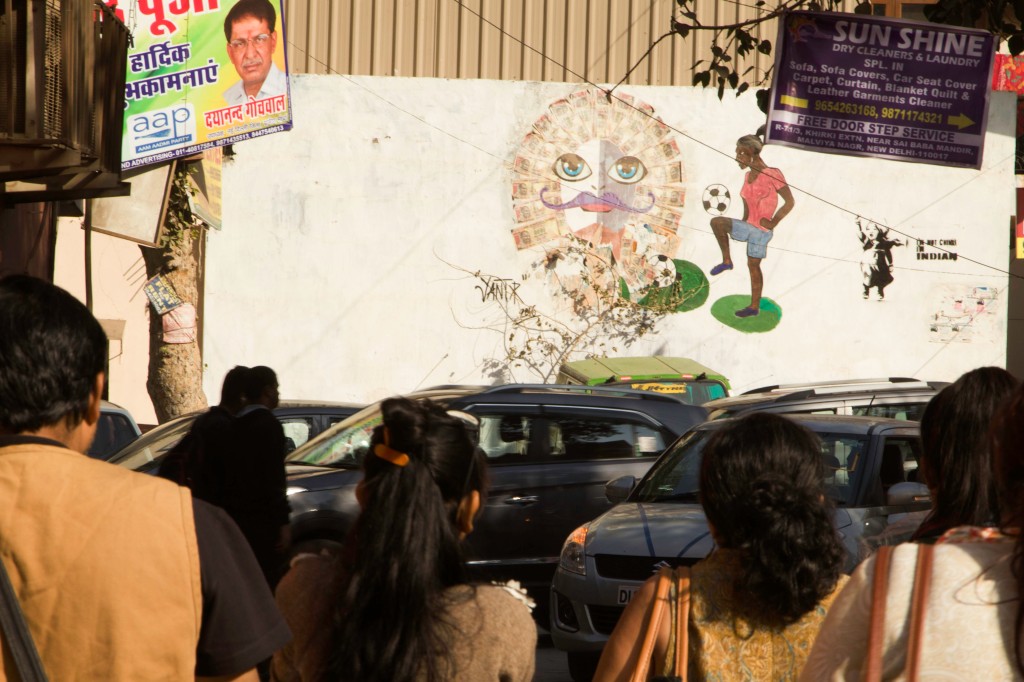 Fortunately, there was now room on the left side of the wall where earlier a garbage heap had been, so the girls decided to paint not one but two more players there. They gathered this Saturday along side their mentor, artist Sreejata Roy, to paint one of them. 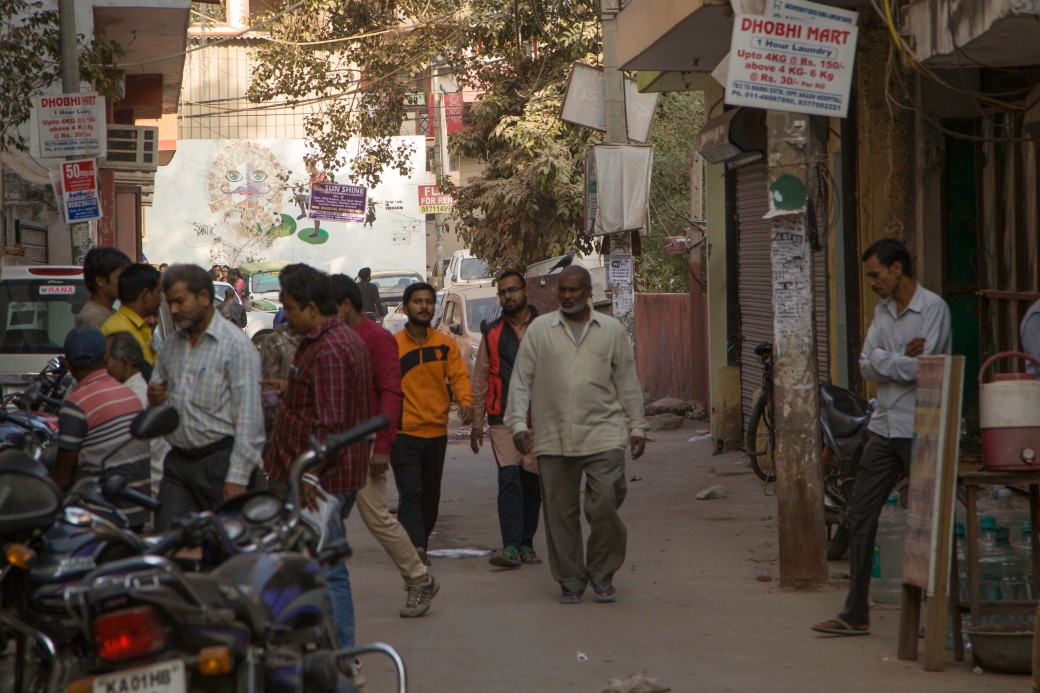 Khirki is a diverse enclave in South Delhi populated by, among others, refugees from Afghanistan, and home to a thriving street art culture. But Khirki is a man’s world.  The group of young women in their mid to late teens around Sreejata were trying to assert themselves by painting women into spaces they would like to occupy, involved in activities in which they wish they were allowed to participate.

Above a tea shop, women drink and play cards alongside men 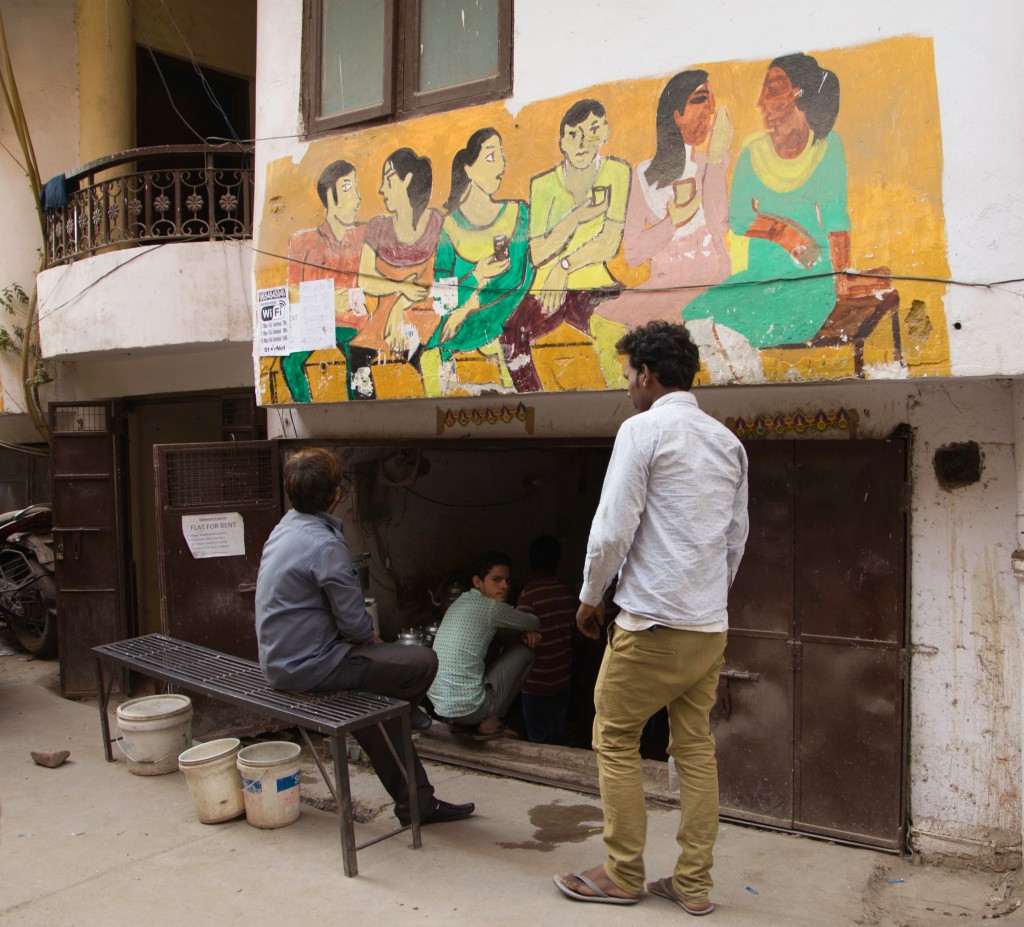 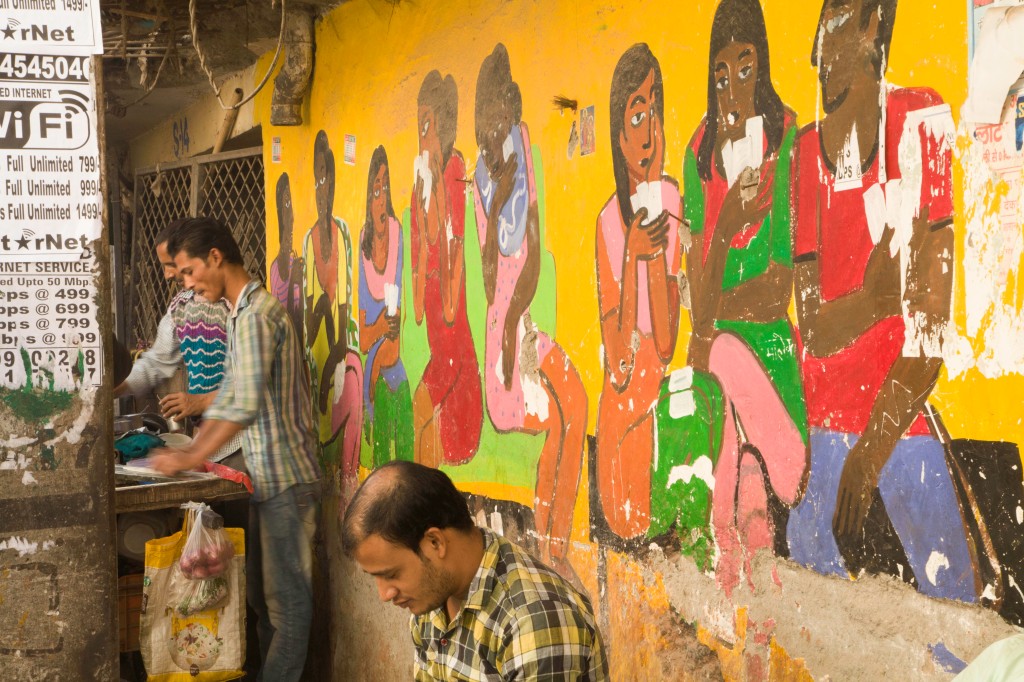 A school teacher sits with her book, while bills cover much of a lady shoemaker who decorates a shoemaker’s stall. 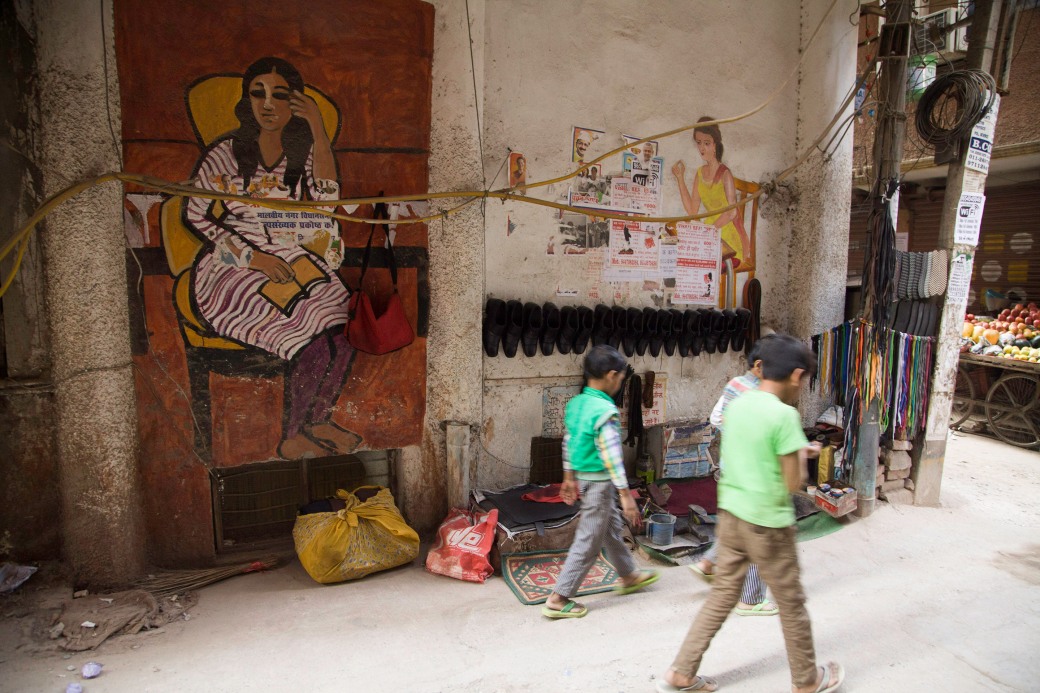 We all cooperate, the shoemaker included, to uncover part of her work table. 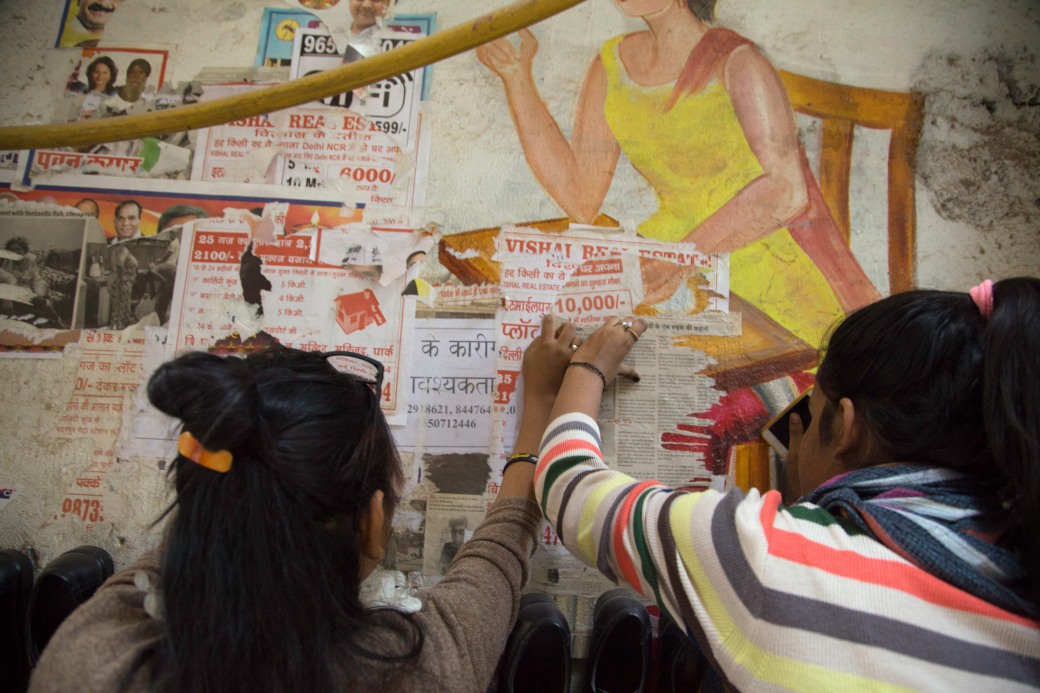 While he seems pleased to host the mural above his shop, 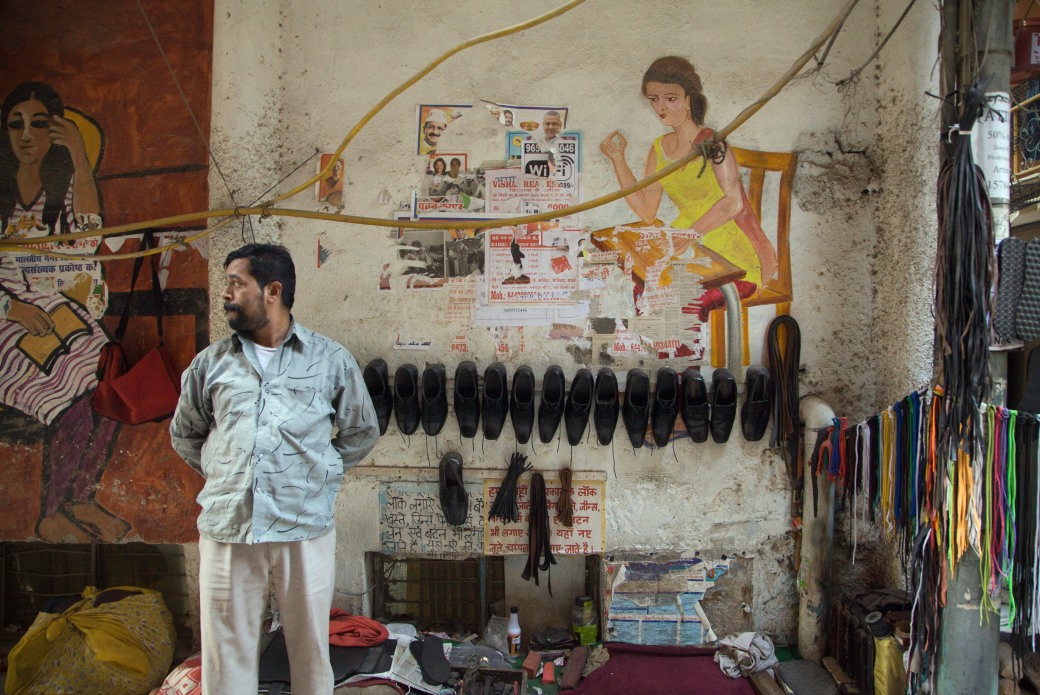 not everyone is happy to see the murals enter their domains. The girls wanted to ride motorcycles, so they started painting murals on walls next to places where motorcycles were parked. 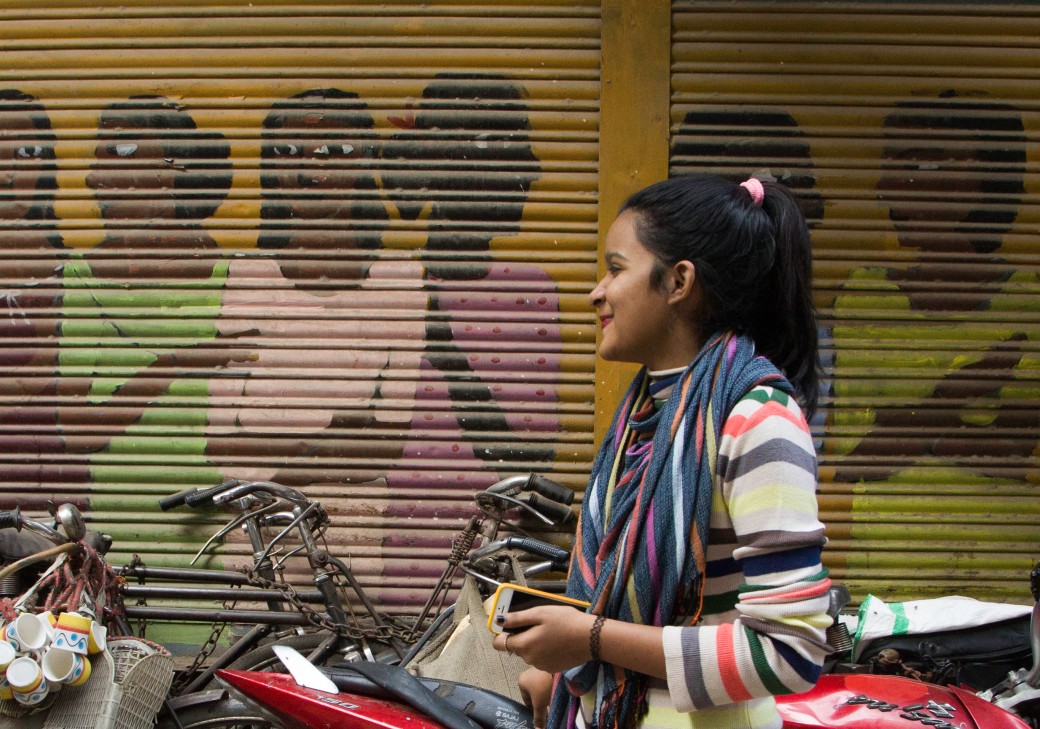 Next to this mural, however, a man started an altercation and stopped them from painting. 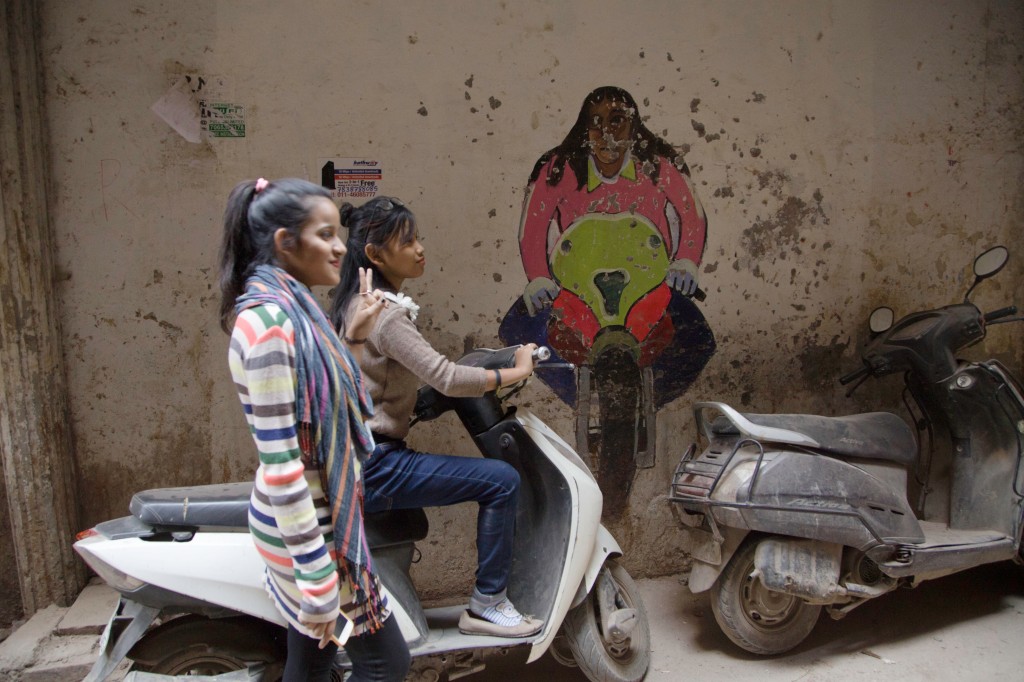 They should paint men driving motorcycles, he said, not women. The damaged wall painting remains, and the girls told me that they do not paint in that space anymore. 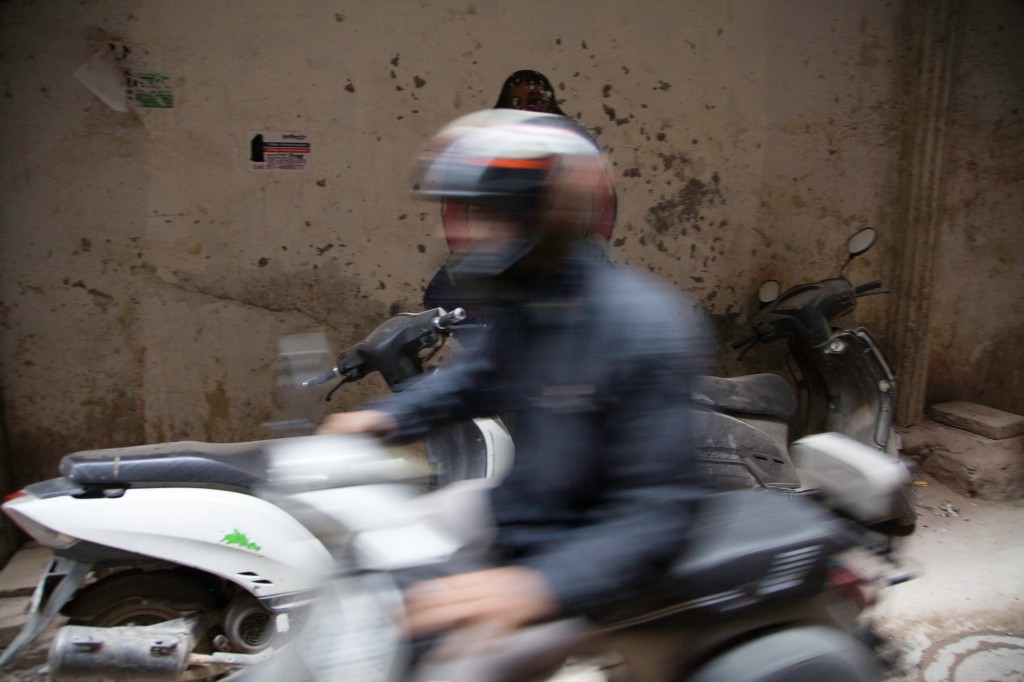 Back at the soccer mural, 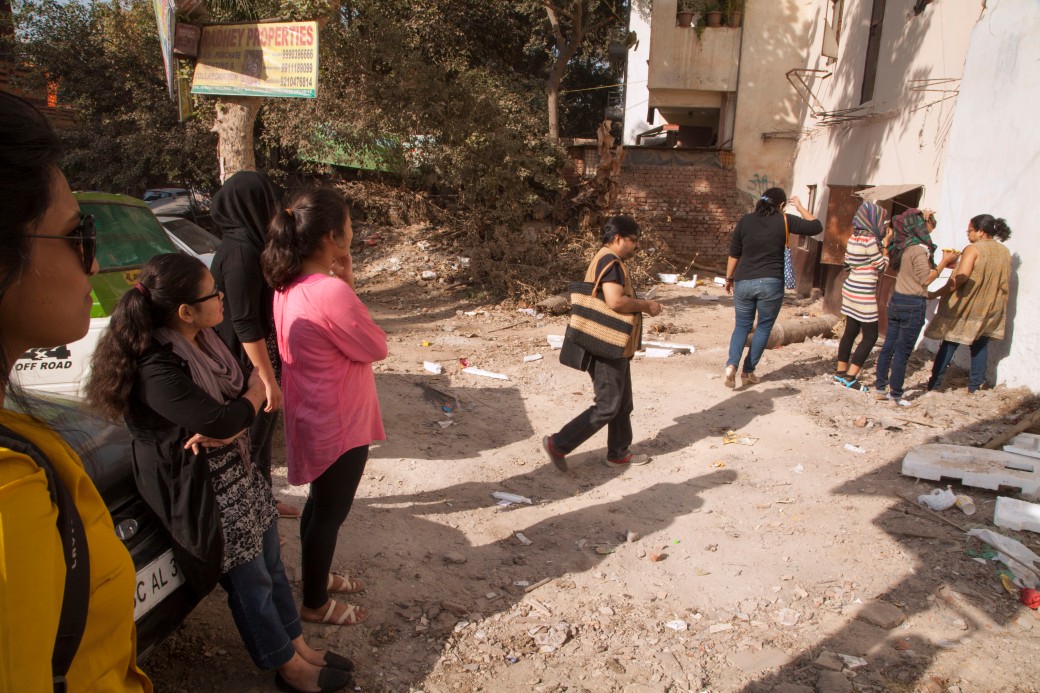 the work continued as people gathered. 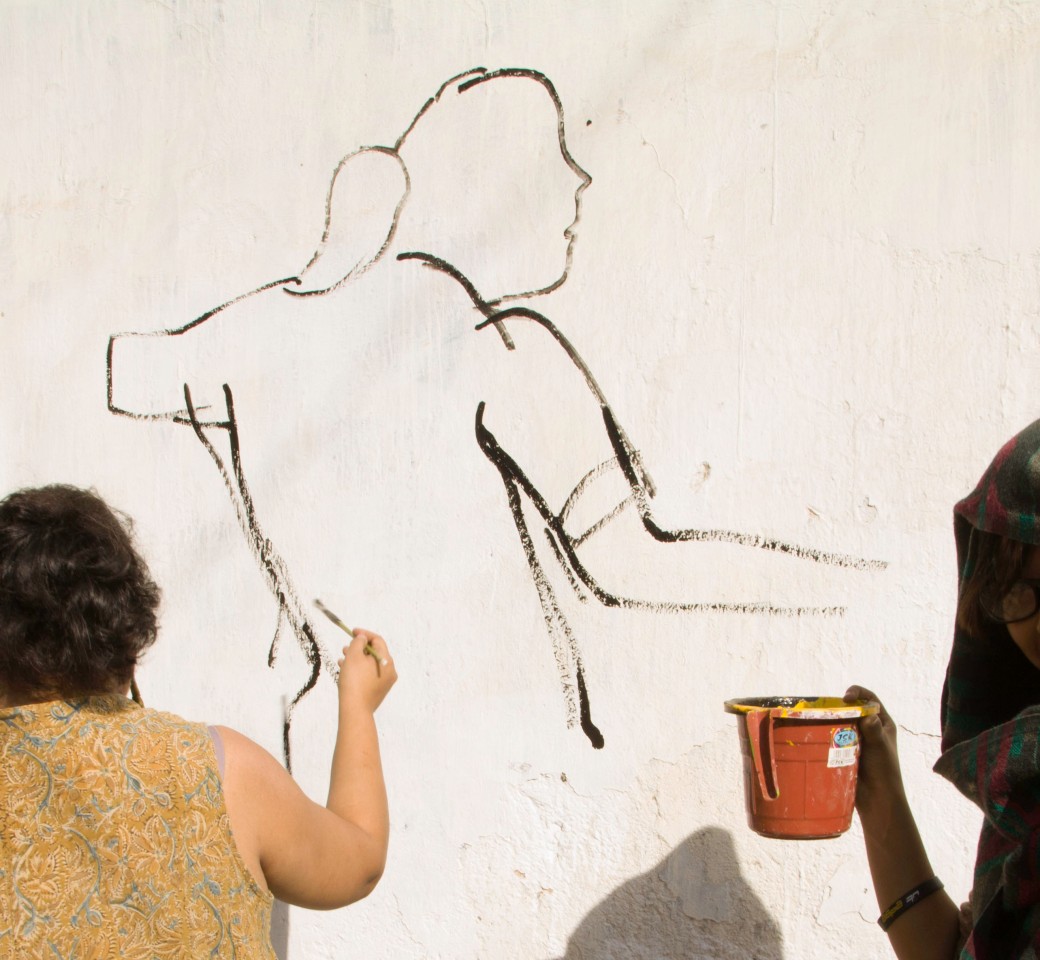 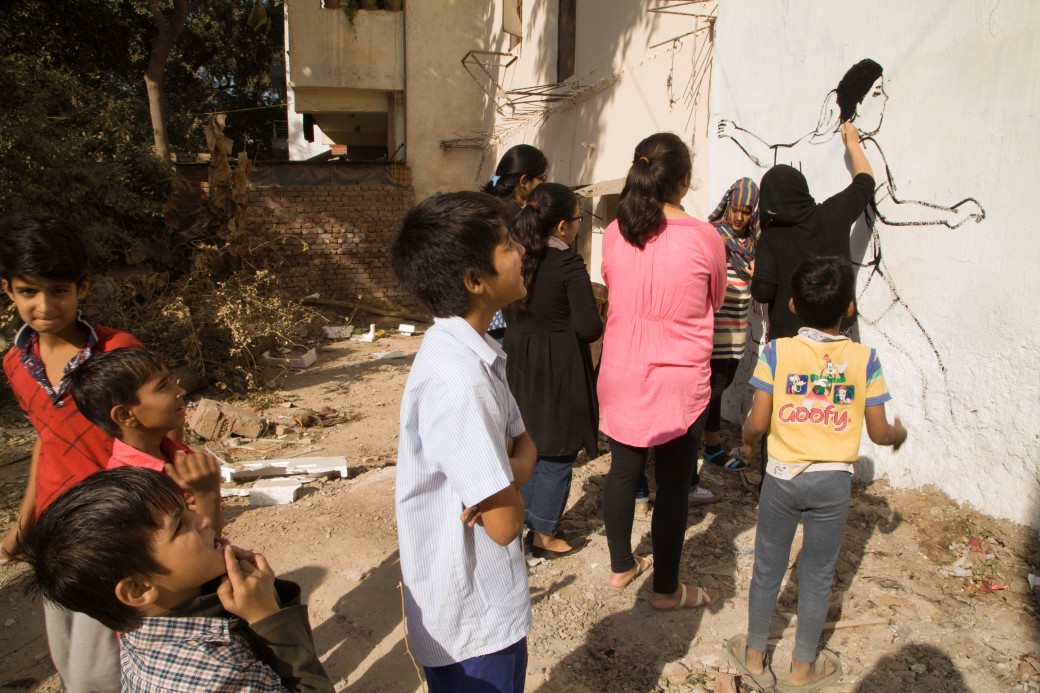 The members of the collective prepared the colors and painted. 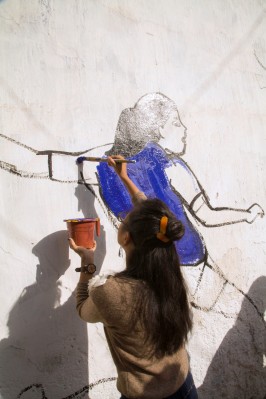 Later, the Kiran Nadar Museum of Art lent us a gallery so that I could introduce the members of the Khirkee Collective to murals in the Dheisheh refugee camp in Palestine. 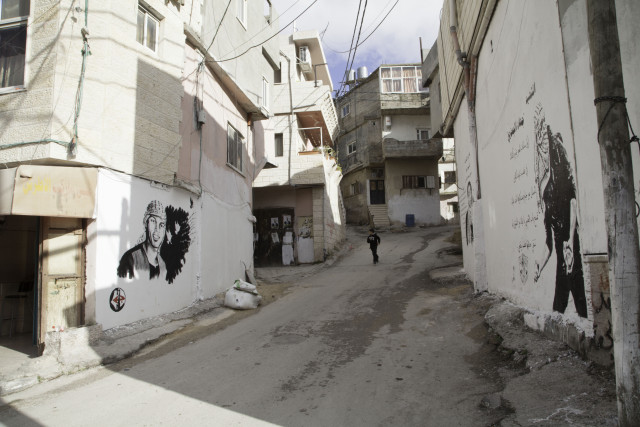 In Dheisheh, children currently grow up surrounded by images of martyrs, many of whom are close to their own age. Most of the subjects are men and all of the painters are boys and young men. Sometimes murals are painted quietly at night, but sometimes they are painted in public gatherings similar to the one I had just witnessed in Khirki. The young painters of Khirki noticed the relentless use of black and white in Dheisheh, and I tried to explain to  them the aims of a few recent murals colored more cheerfully, like those in their own murals.

Despite the mournful air of the paintings in Dheisheh and the vibrant and hopeful feeling of those in Khirkee, the people of Khirkee and Dheisheh share a great deal. They share a belief in the powerful presence with which an image can dominate a site. They also share respect for the work of others. The muralists in Dheisheh, like those of the Khirkee Collective leave the work of others in peace, choosing to register disagreement by painting alternative murals nearby. And they share the conviction that discussions centered on the murals, which begin even before a mural is painted and continue in words and images, are central to the work of the murals themselves. 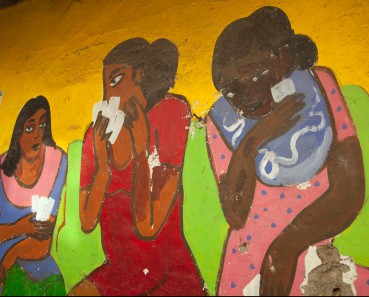 I think of these murals as openings in walls, as windows or gates through which the residents of the neighborhood can see into another world. That this world is meant to be the future seems clear even in murals, such as the ones in Dheisheh, that ostensibly do no more than memorialize the past. 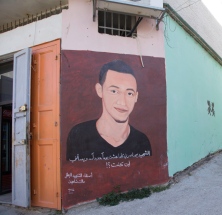 But the murals in Khirki focus steadfastly on the future. I asked the refugees from Afghanistan whether they ever wanted to return to their former homes. “Never.” Do your parents ever talk about wanting to return? “Never! It is too dangerous. It will never be any better there.” They look forward, they said, to a better future here in Khirki. I believe they hope that the murals will help them see this future and transform what they see into reality. 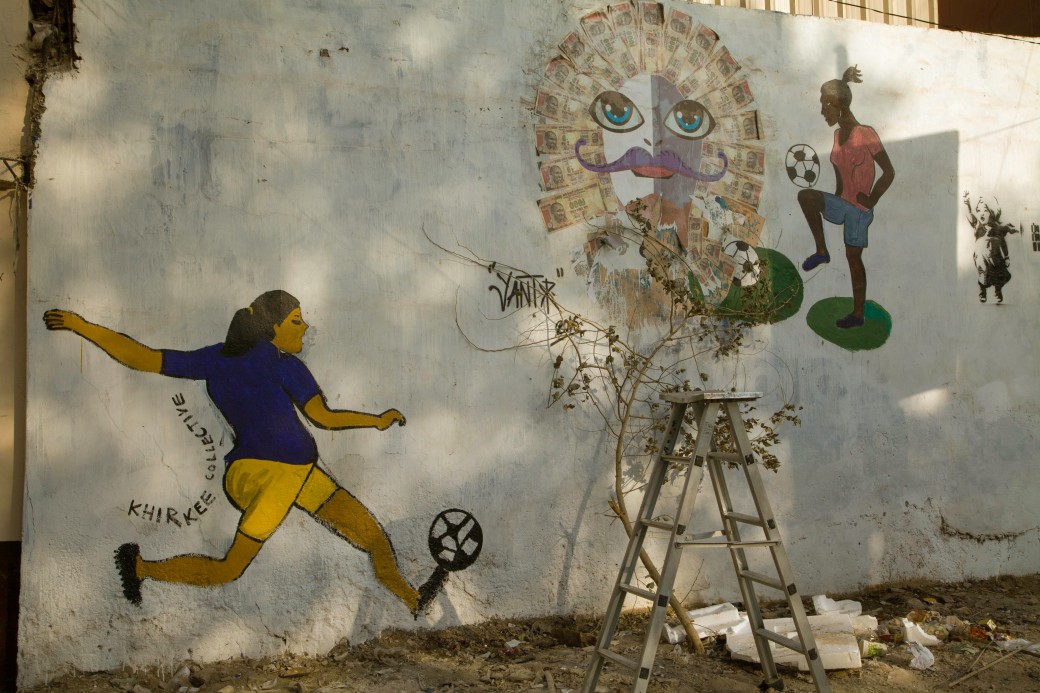