Volunteers with Ta’ayush, along with an international organization, fan out to various pastures in South Hebron.

We are by the Israeli settlement Mitzpe Yair. Its settlers have disputed a strip of land in the valley below the settlement, as I understand it a strategy to extend their ownership. The civil administration keeps the sheep from grazing there while the land is in dispute. In a nearby pasture last week, similar soldiers declared a similar patch to be an “closed military zone,” suggesting that it served some sort of strategic purpose. In both places the sheep must graze on higher rockier ground. Should the military leave, settlers will drive the shepherds off of this grazing land, too. 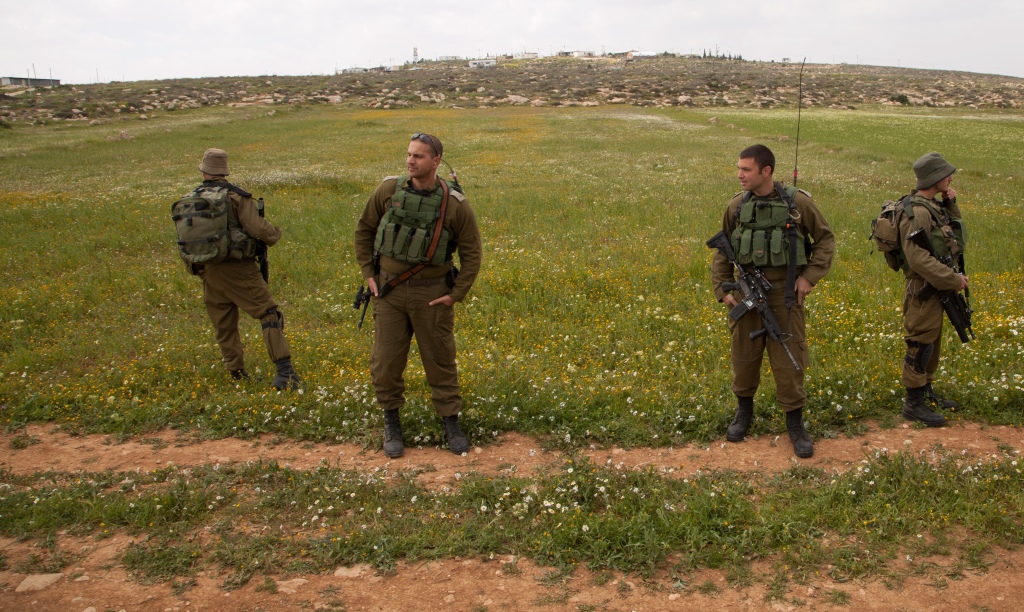 I struggle not to be just a bystander, but looking and watching are the activities of the day. Watching sheep can mean different things to different people. 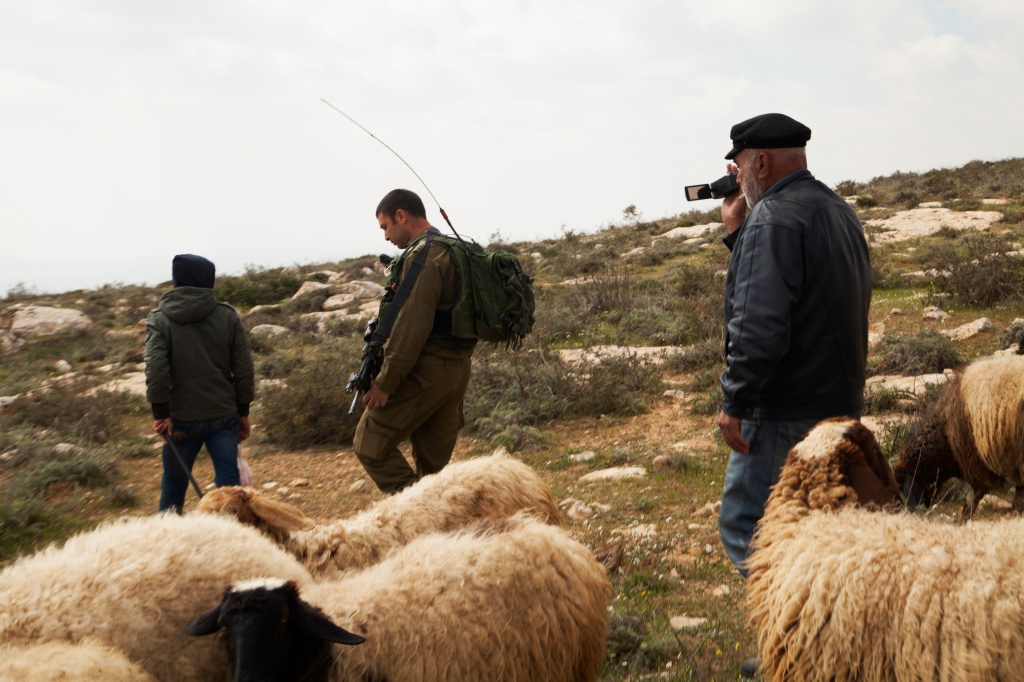 Some watch with cameras 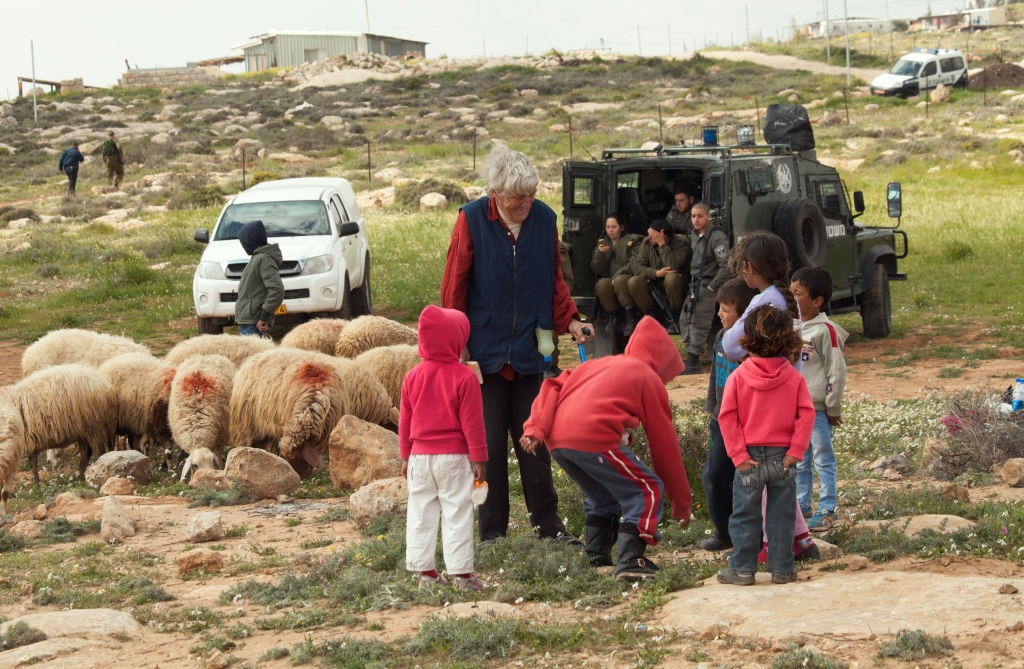 I have seen this officer before. I wonder how he feels 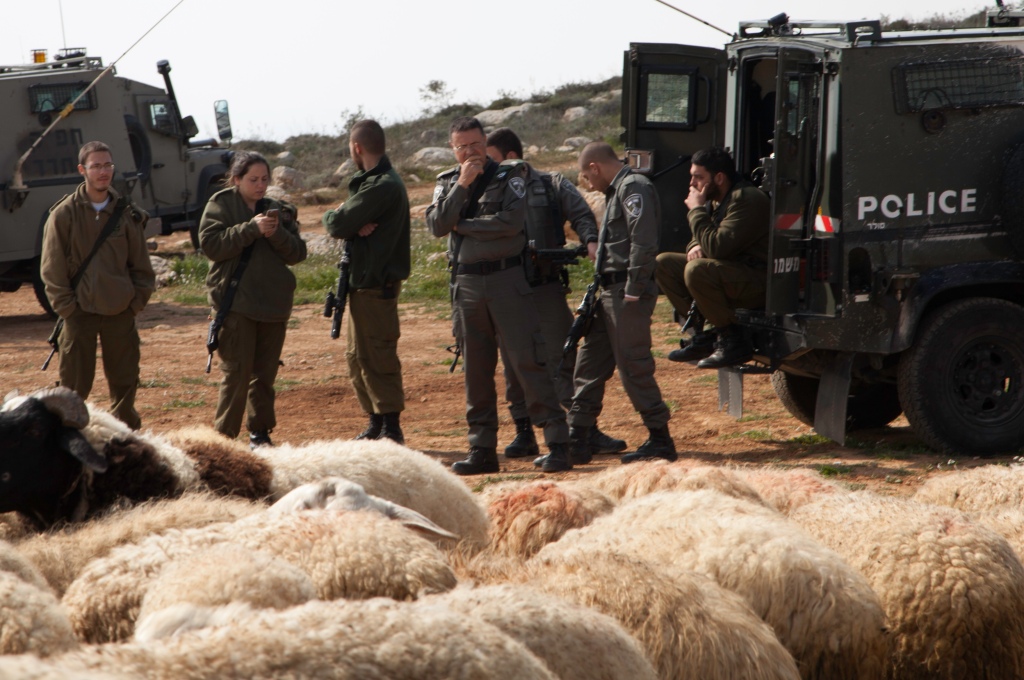 Here he is last May. You may read about the tractor here

All day, military vehicles follow volunteers wherever they go.

Nasser, a Palestinian who has been a witness with B’tselem and Ta’ayush for years, invites us to lunch at his home in Susya, the tent community (no building allowed there) that long ago replaced the destroyed village and its successors.

At the end of the day we wait on the road for the last few volunteers to return from a pasture. Three jeeps and at least a dozen soldiers wait along side us. 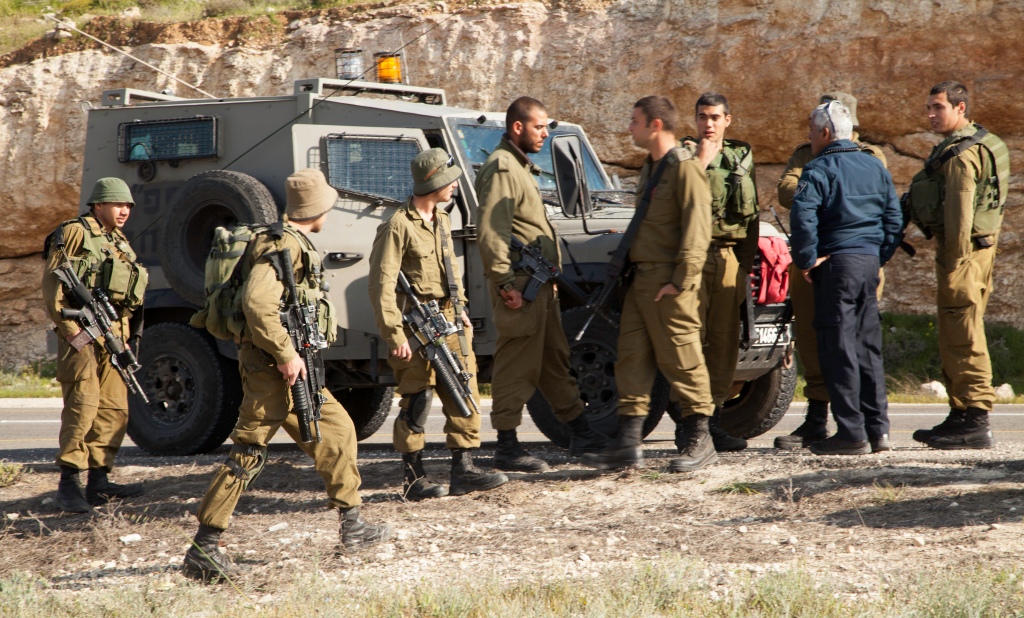 and scan the valley for our protection.

When our backpack-bedecked, scruffy crew is complete, we leave without interference and the soldiers leave, too. How much has the supervision of our pastoral day in the country cost Israeli taxpayers? I wonder, but not for long. Some still say that photography conveys truth. But not even unmediated looking with the naked eye conveys truth. As we are leaving, Nasser finds us again and tells us what has happened without anyone to witness and prevent it. I wish that my bucolic photographs could somehow conjure the scene of settlers attacking and injuring a six-year old girl with stones. Perhaps the visual immensity of the surveillance that keeps shepherds and their sheep off the small patch of grass suggests why no protectors were available for a small child gathering food for her family’s livestock with an older child just outside the settlement of Ma’on.

I photograph only volunteers watching the police explain that the child will be treated in the van, taken to the station with Italian volunteers, allowed to deliver her report with her family and returned to her home.

No one expects any more than this from the authorities. No arrests will be made. Even if I could see inside the van, it would probably be unkind to photograph a child who has had enough for one day. Photographs of the visible wounds of the invisible girl can be found here. Instead I post a snapshot that I could not resist taking over lunch earlier in the day.