I owe the comparison with Birthright to Abby Glogower, so this post is for Abby.

“I came to think that there was something very special in this land that a lot of people recognized and wanted to claim for their own.” Stephen Shore, about his contribution to This Place 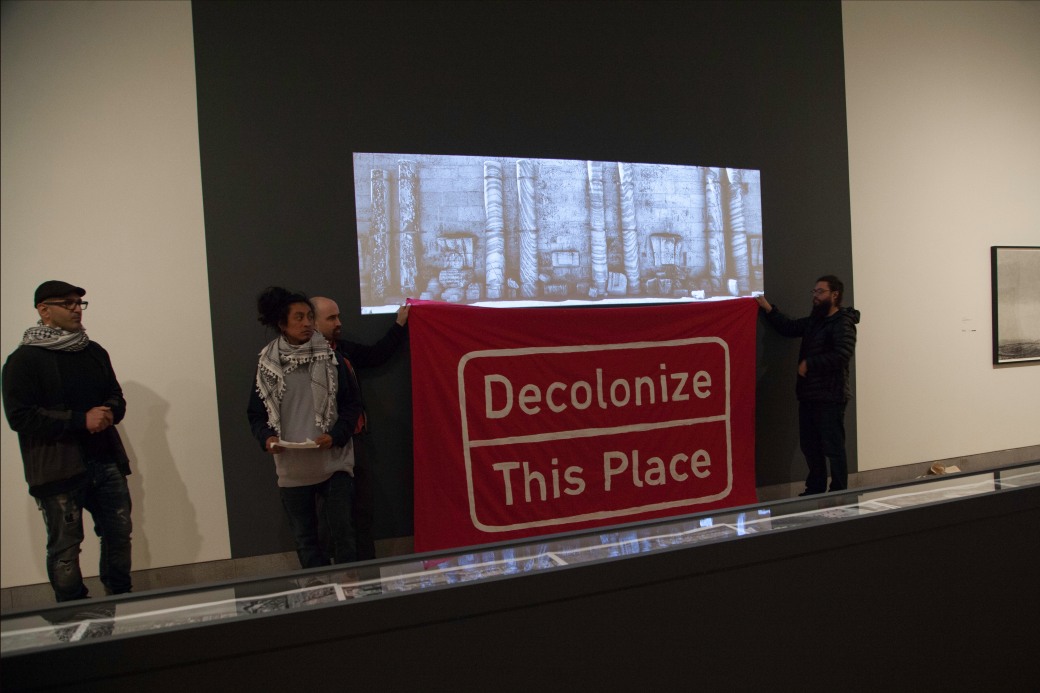 A pro-Palestinian, anti-gentrification protest. The protestors are standing in front of a projected photograph by Josef Koudelka, in the exhibition This Place, Brooklyn Museum, May 7, 2016.

It’s all about the land. The same land visited by young Jewish men and women in free trips organized by Taglit-Birthright with an eye to giving them a closer connection to that land and encouraging them to marry other Jews. Similarly, the project This Place brought twelve world-famous photographers to Israel and the West Bank for extended periods to offer them a chance to forge a visual relationship to “this historic and contested place.” The hope was that they would portray Israel in a “universalizing” way and transcend the “polarizing perceptions and familiar images of the region in the mainstream media.”

The introductory text on the opening wall of the Brooklyn Museum’s exhibition This Place did offer a comparison, but not to Taglit. The text states that this project, spearheaded by Frédéric Brenner, rivals the photographic project of the Farm Security Administration, an undertaking of the United States government during the Great Depression, and the Mission photogtraphique de la DATAR, a French documentation of the French countryside in the 1980s. The differences here, according to the same wall label, are that This Place was privately funded, not publicly, and that its photographers were foreign, not Israeli. On the face of it this comparison is ambitious: I won’t speak to the French project, but the Library of Congress has put 167,000 Farm Security images on line. 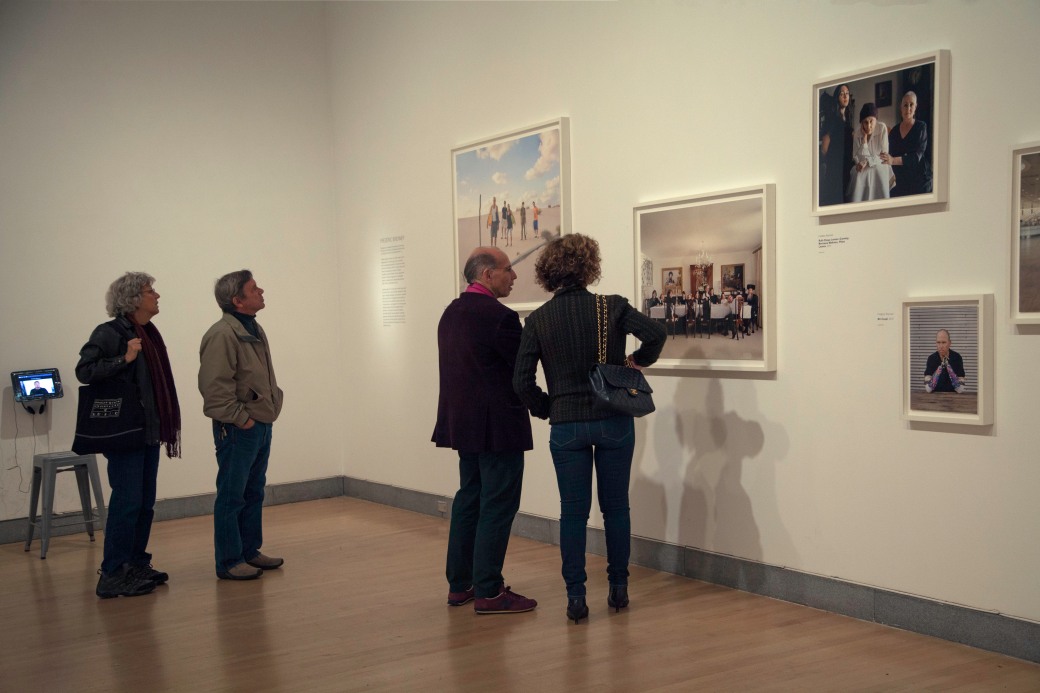 Frédéric Brenner, organizer of This Place, exhibited his own photographs in the exhibition along with those of the famous photographers whom he recruited for the project.

It might seem superfluous to enumerate the differences between it and This Place, but here are some anyway. Walker Evans, Ben Shahn, Dorothea Lange, Russell Lee, Gordon Parks, photographers of Roy Stryker’s project, were in their thirties or even younger, much of their famous work still ahead of them. They came to document poverty amid an economic crisis in their own country. The photographers that Brenner has gathered are all well established; most are in their sixties, seventies, even eighties. They were not brought in to document a crisis, although one certainly existed and most of them wanted to see its effects. Brenner had to be persuaded to allow them to visit the West Bank as part of the project; he wished them to avoid politics. Several of them touched on it only obliquely. Certainly they did not come as part of a New-Deal-like effort to combat rural poverty and inequality out of a commitment to social reform. No Migrant Mother can be found in the exhibition, and although part of the bargain with each photographer included the publication of a book, no Let Us Now Praise Famous Men is likely to emerge. 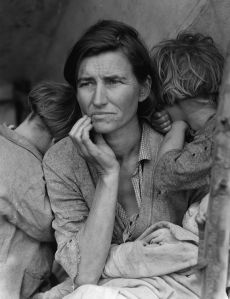 The photographers of This Place were strangers come for extended, but still limited times. The question, what can a stranger’s eye hope to illuminate in this situation, applies to me as well in my own ongoing project, and this is the light in which I see and worry about This Place. 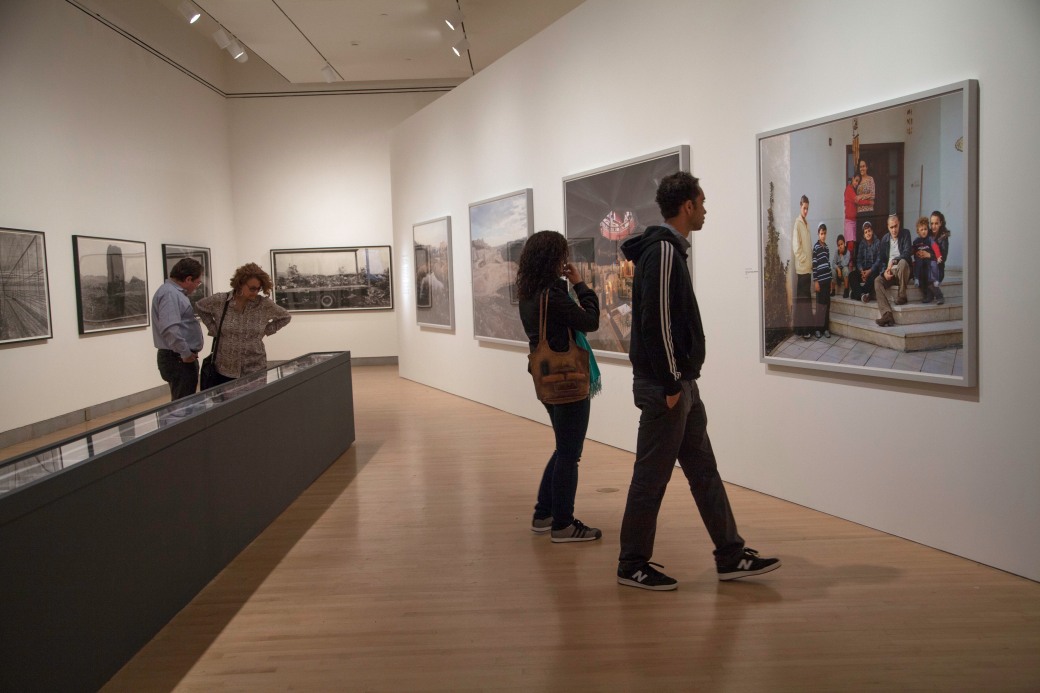 Photographs by Thomas Struth in the exhibition “This Place,” Brooklyn Museum.

Some of these photographers are my favorites, but their contributions to this exhibition are not my favorite work. Thomas Struth was well aware of the ethical situation in which he was enmeshed. His almost surreal look at the settlement Har Homa is perhaps the classic image of that terrible place. But within the framework of the exhibition it is little more than an example of one of his classic genres, along with others: monumental street photography made with a view camera, family portraits, cityscapes and landscapes. 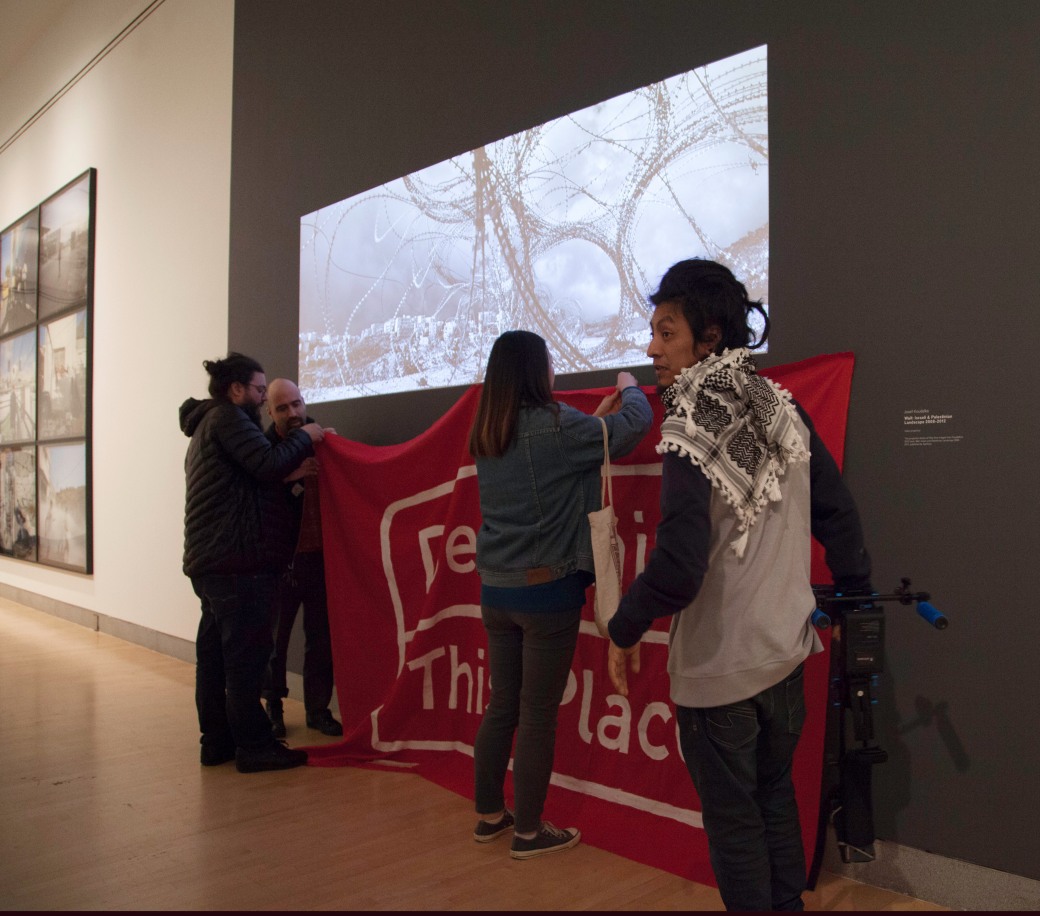 Josef Koudelka sought to portray Israel’s “security wall” as a force for the destruction of the environment. I appreciate Koudelka’s attention to the way in which the wall affects the landscape and I take his concern seriously. Yet his work, beautiful here as always, in the main shows me what I have already seen and photographed. Murals in the Aida camp, for example, the way the “separation” wall loops through the landscape, swooping to enclose a bit of land in a greedy fist, and the barbed wire that stretches and curves everywhere in the world, but for some reason, is almost irresistible to photograph here. All these subjects immediately strike my eye. 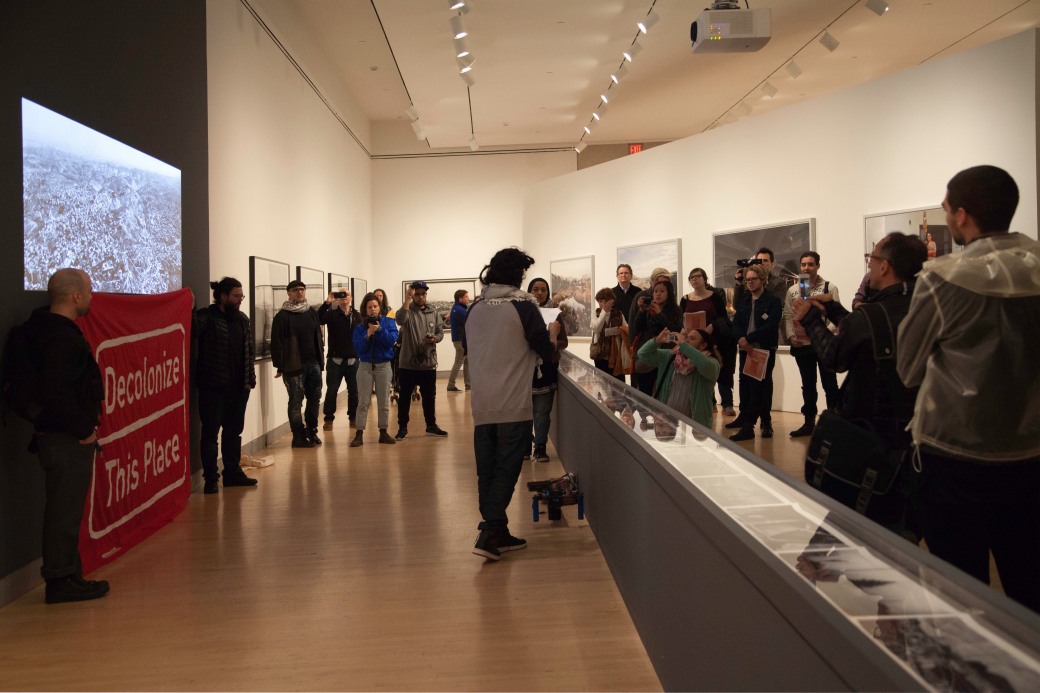 Protesters in the exhibition This Place

But I could never have duplicated Faisal Sheikh’s series Desert Bloom. It sent me back to my own photographs to look at their subjects differently. He arranged his photographed traces of Beduin villages in the Negev, taken from the air, in a tile like grid format on one wall of the exhibit. I have no interest in making areal photographs; it is too important to me to stay down on earth among people. Yet I could not tear myself away from them. 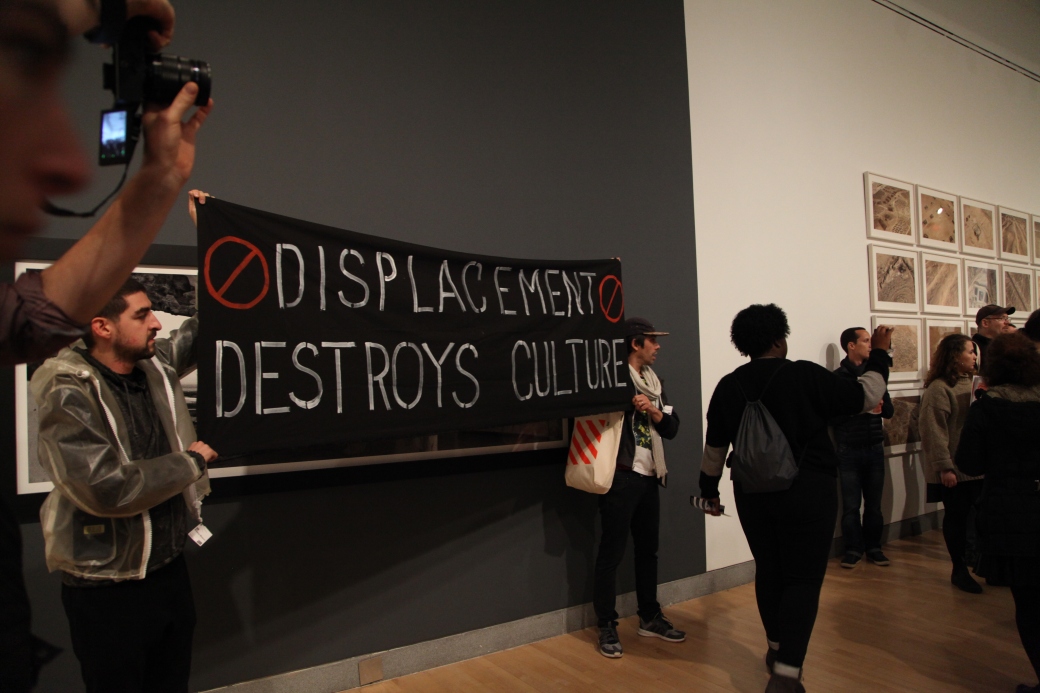 Demonstrators near the installation of Desert Bloom by Faisal Sheikh

The unremittingly pale brown, washed out beauty of these desert tiles pulled me in. Subtle deviations in the ground are indications of cataclysmic changes. They signify the nearly effaced suggestions of the people who once lived there. The ominous feel of the title, “desert bloom” alludes to Ben Gurion’s call to the Jewish people to “make the desert bloom.” Here the “bloom” looks less like fertility than like the cruel beauty that keeps a desert from sustaining life. 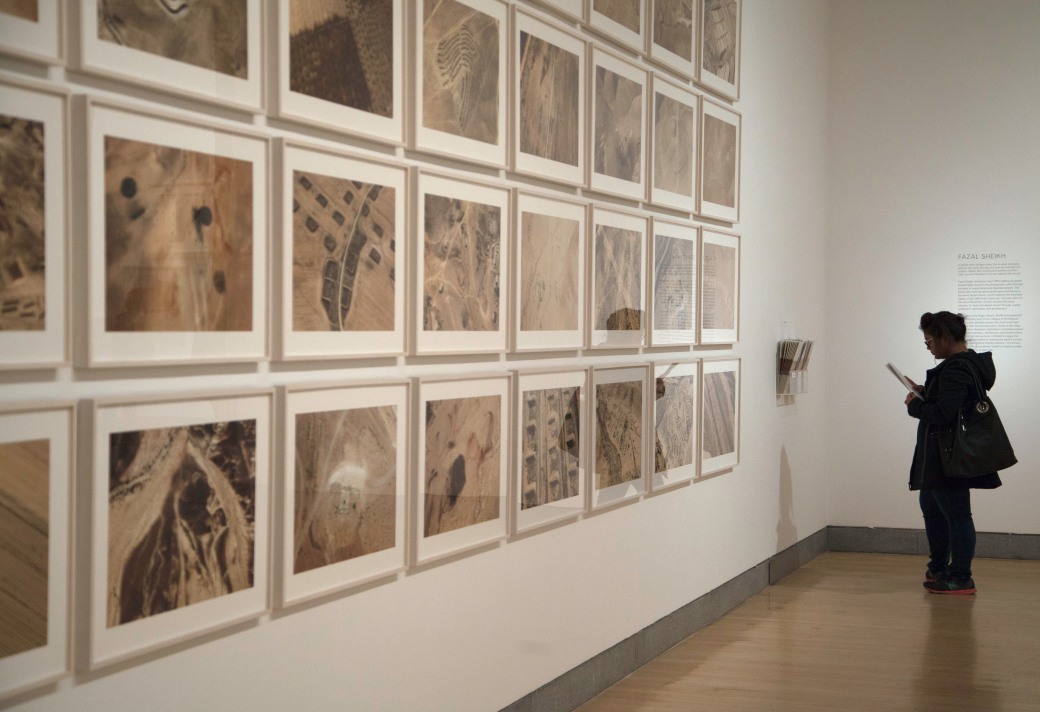 Once I have looked at these distanced photographs, oddly similar to Alan Cohen’s photographs of boundaries in close-up, I can no longer see the ground in the same way again. 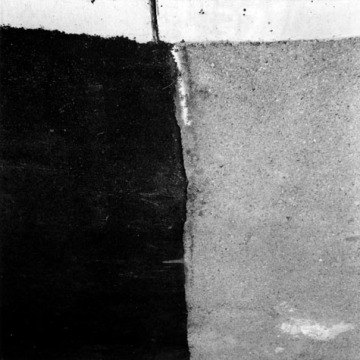 Sheikh has provided ample reading material to explain the subtle clues to large changes that have taken place in the land. I look for images like those that Sheik has photographed from far away but writ large that will explain for me patterns of dispossession and camouflage and the sheer effort to go on in the face of them.

I wonder what areal views of green strips of land might look like where Palestinians and their sheep are not allowed. 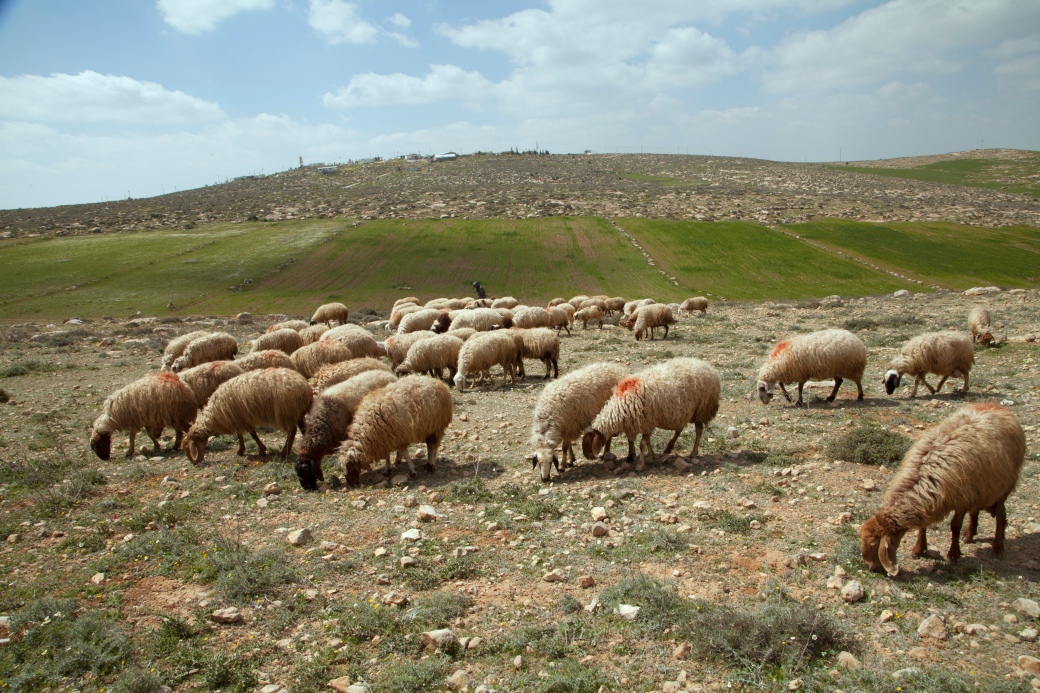 I wonder also about areal views of green strips of land where only Palestinians and their livestock are allowed. 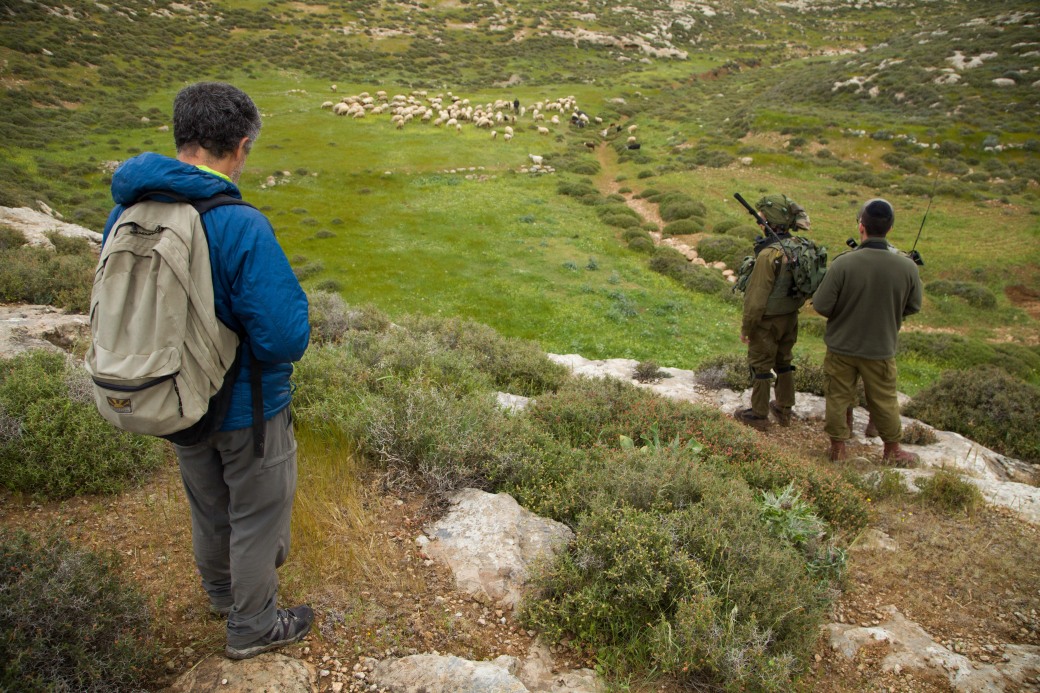 From above, volunteers from Ta’ayush accompany a Palestinian grazing his sheep to protect them from nearby settlers. Israelis and, I was told, anyone eligible to become one are prohibited from descending into the valley. Soldiers ensure that we obey the rule.

Can you see isolated solar panels from the air?  abandoned fences and poles and destroyed houses? 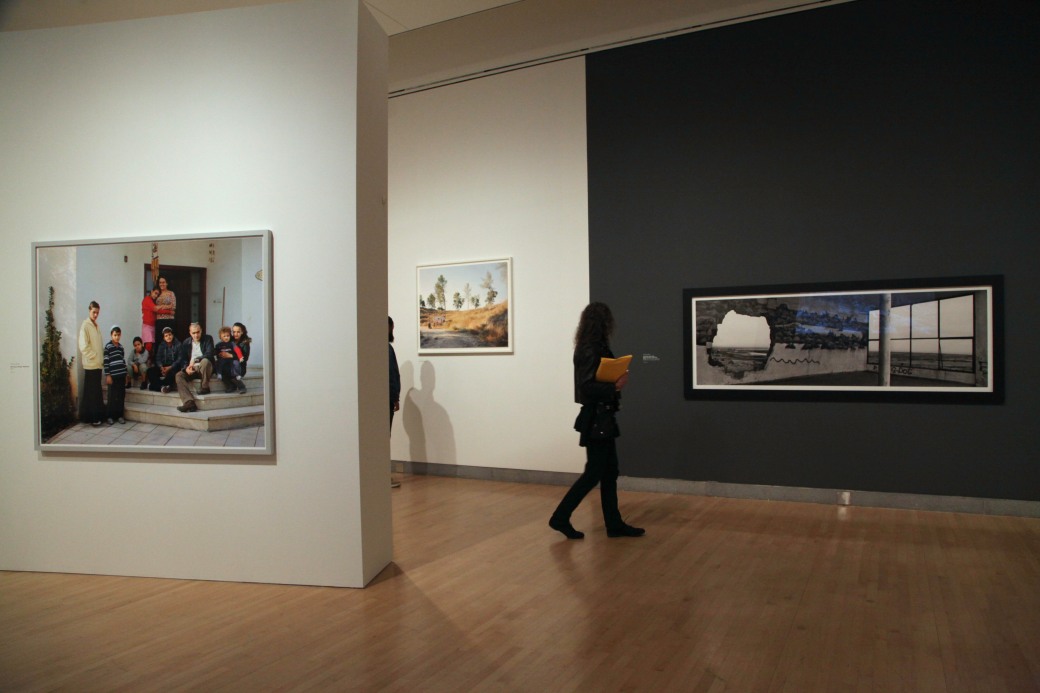 How does an exhibition with well-intentioned photographers fail to attain the complexity to which it aspires? The curators may have something to do with it. The calm, cold beauty, the isolated photographs, the laconic captions with little or inadequate explanations. Jeff Wall’s photograph of Beduins sleeping near a prison in the Negev desert, “where this traditionally nomadic Arab people has lived for centuries.” What exactly does he know, assume, about their centuries-long Nomadic life? Have they always lived in the Negev? What does it mean to be a nomad? Did they always sleep outside on the ground covered only with blankets? Wall himself explains, in an interview, that he sees and photographs in a bubble, but that the photograph “knows” more than he does. I am with him this far, but not when he goes on to say that he can detach the social conditions of the work from its aesthetics. 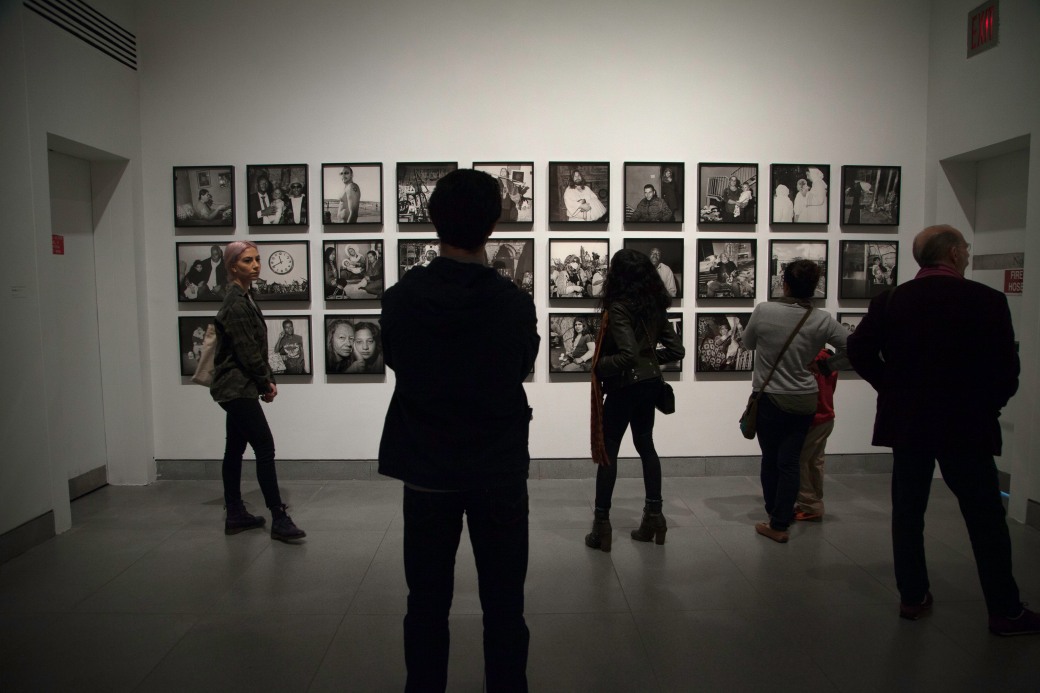 Photographs of people Rosalind Fox Solomon met while traveling on commuter buses in Israel and the West Bank.

Sometimes there is no explanation at all. 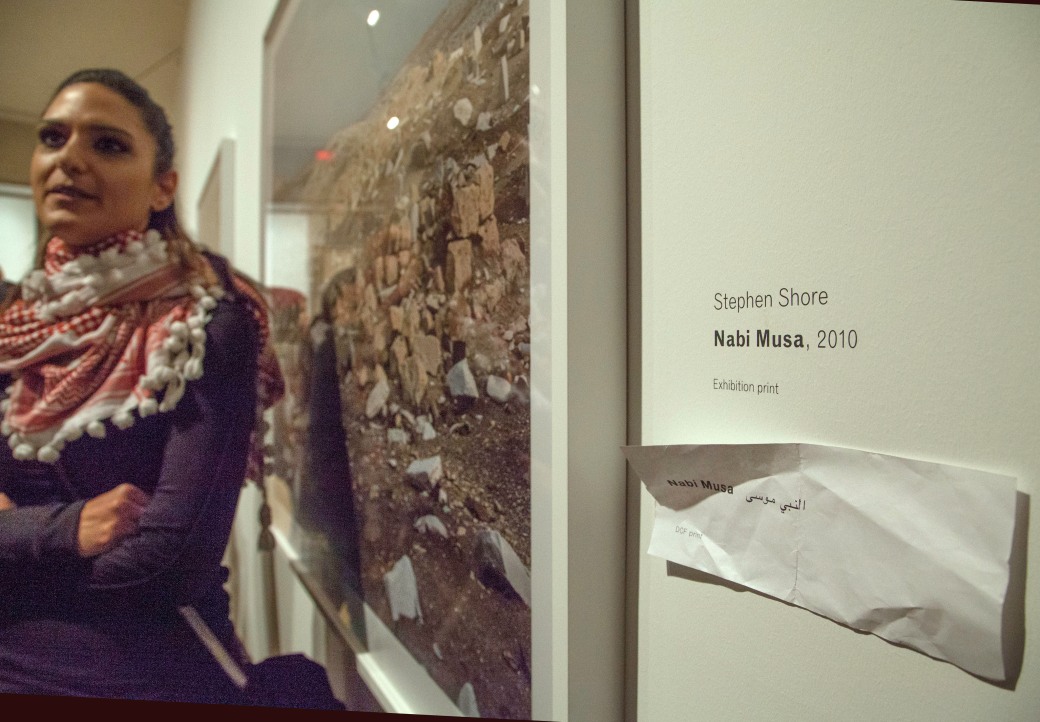 In an effort to bring to light some of what the photographs, if not the photographers might “know,” demonstrators on Saturday supplied new captions for Stephen Shore’s landscape photographs of “this land that a lot of people want to claim for their own.” 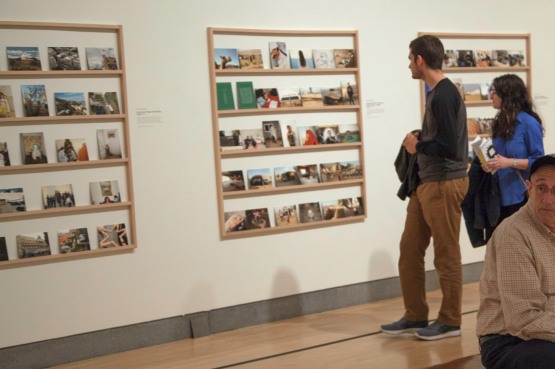 Photographs by participants in workshops run by photographer Wendy Ewald in Palestine and Israel. What do the explanations say? A line on the floor discourages visitors from finding out.

There are other strategies. The small photographs taken by Wendy Ewald’s workshop participants are arranged on shelves. Wall copy is also arranged on shelves, but viewers cannot come close enough either to the photographs or to the written explanations to examine them and perhaps have their assumptions challenged.

The exhibition strives for complexity but what is complexity? For the most part it seems to suggest that complexity is even handedness. Once one side occupies the other, however, it is impossible to deal an even hand. Similarly, complexity is not universality. To universalize tends to normalize the unacceptable. Complexity demands a degree of nuance that some of these photographs possess but that the framework keeps hidden. All of the photographs “know” more than their photographers, just as my own photographs “know” more than I do. But the neutrality of the installation mutes this knowledge.

The private funding does, too. That the organizations and individuals that funded This Place are not governmental entities means that the organizers did not have to confront the cultural boycott advocated by BDS, the movement that uses cultural boycotts among other strategies to force an end to the occupation. But all the same the funders for the most part fund Zionist organizations; some of them funnel money to settlements and even the Israeli military. None of them fund initiatives to help Palestine or Palestinians. The exhibition itself, which prefers the term “West Bank” to “Palestine,” has tamed its subject.

Perhaps the funders of Taglit-Birthright felt some kinship between This Place and the mission of the Birthright trip to tie young Jews to the land and to one another. The co-founder of Taglit and several of its donors are among the organizations funding This Place. But sometimes a Birthright trip backfires. A young birthrighter may come to see the agonizing contradictions between the framing narrative of the trip and the intolerable ethical situation that confronts any visitor whose Jewish education taught her to regard ethical responsibility as its basis. If so, she might leave feeling that she has been used, and these photographers should do the same.

and one more thing: The demonstration on Saturday, May 6, yoked two protests together, a pro-Palestinian protest aimed at exposing the ideological “neutrality” of This Place and  another that targeted the museum’s role in gentrification through pandering to real-estate moguls on its board. For that protest, the demonstrators targeted an exhibit, Agitprop, about the use of art for social justice. 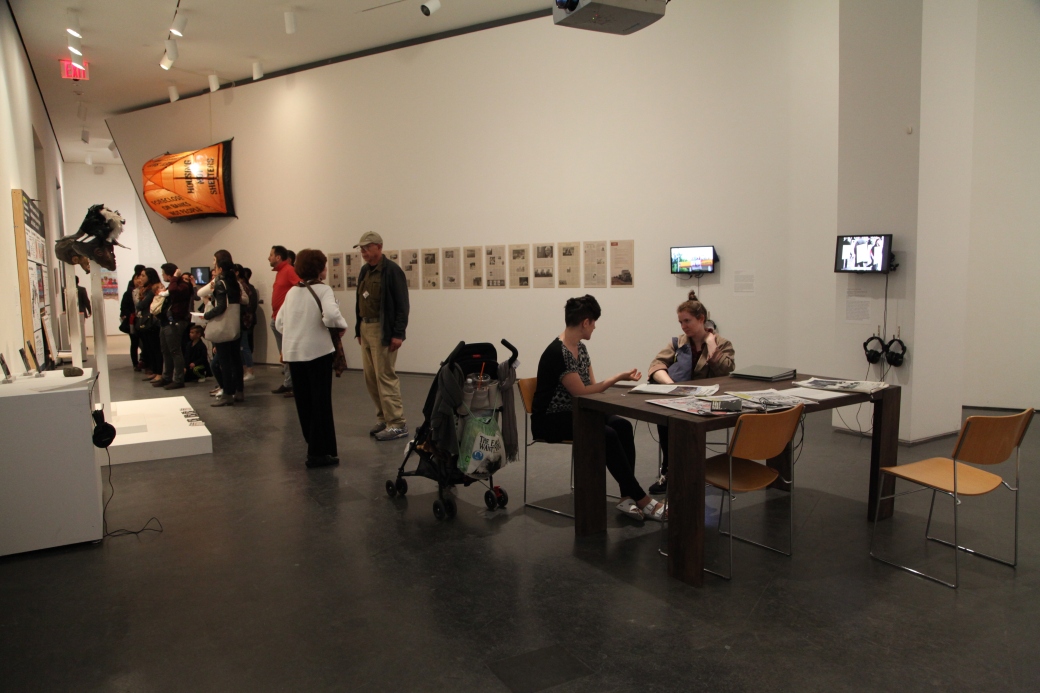 Interactivity was built into the exhibition Agitprop 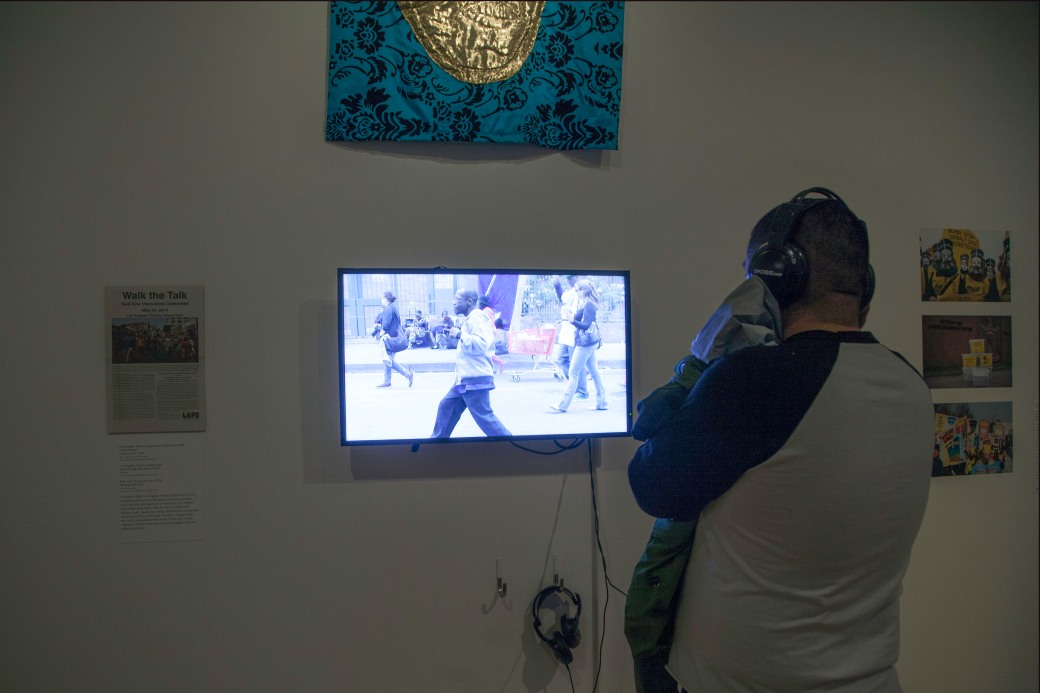 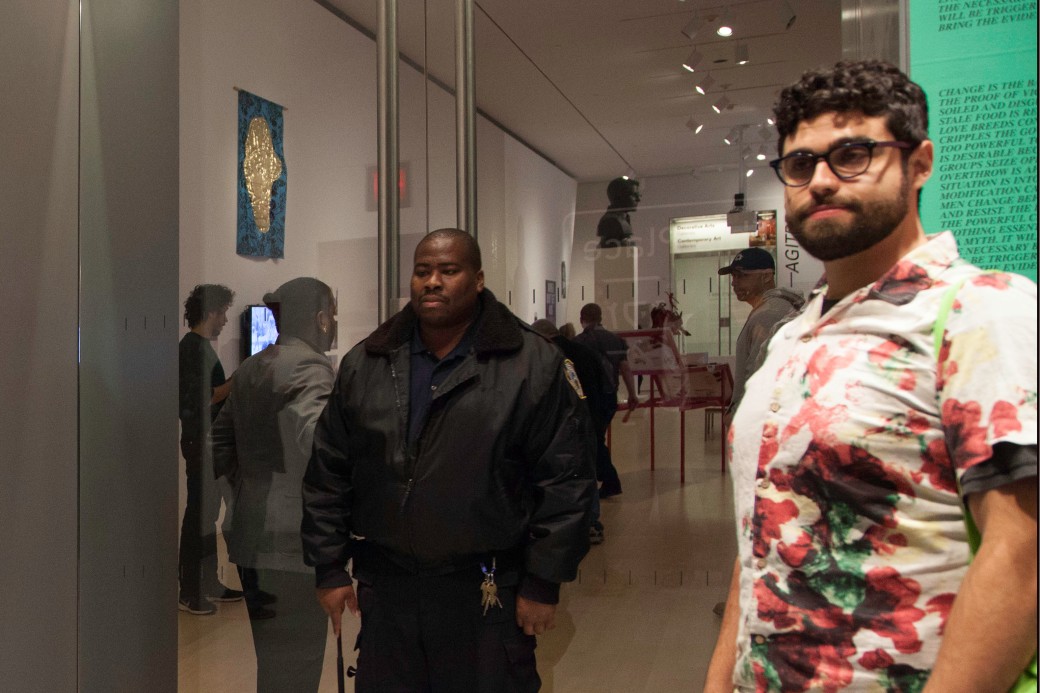 if not otherwise identified, all photographs and texts © Margaret Olin, 2016. 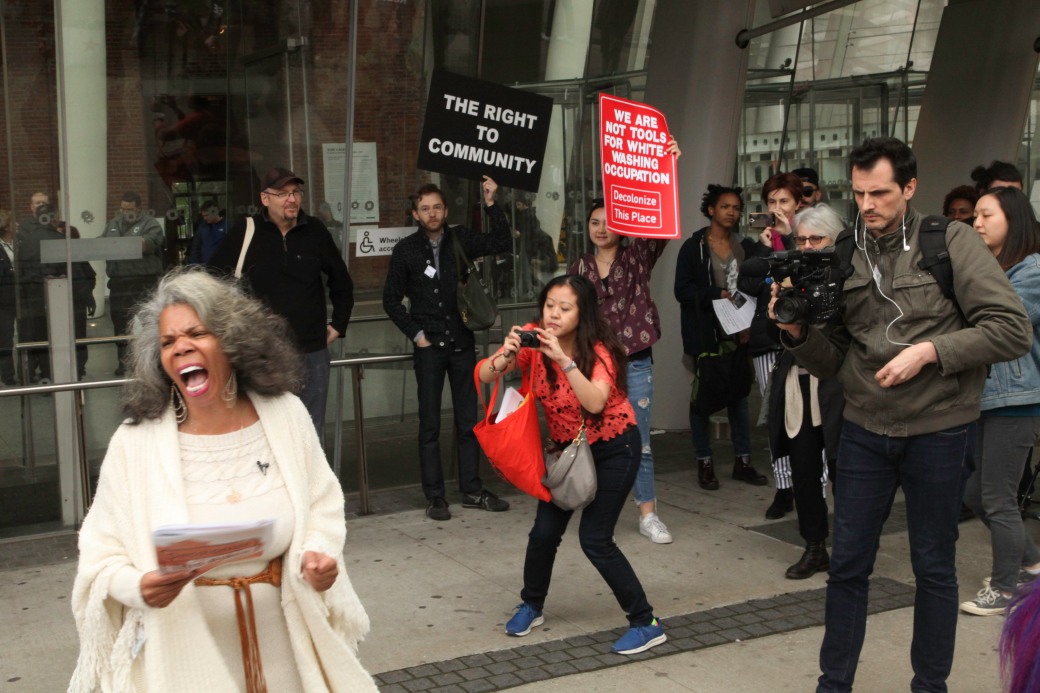 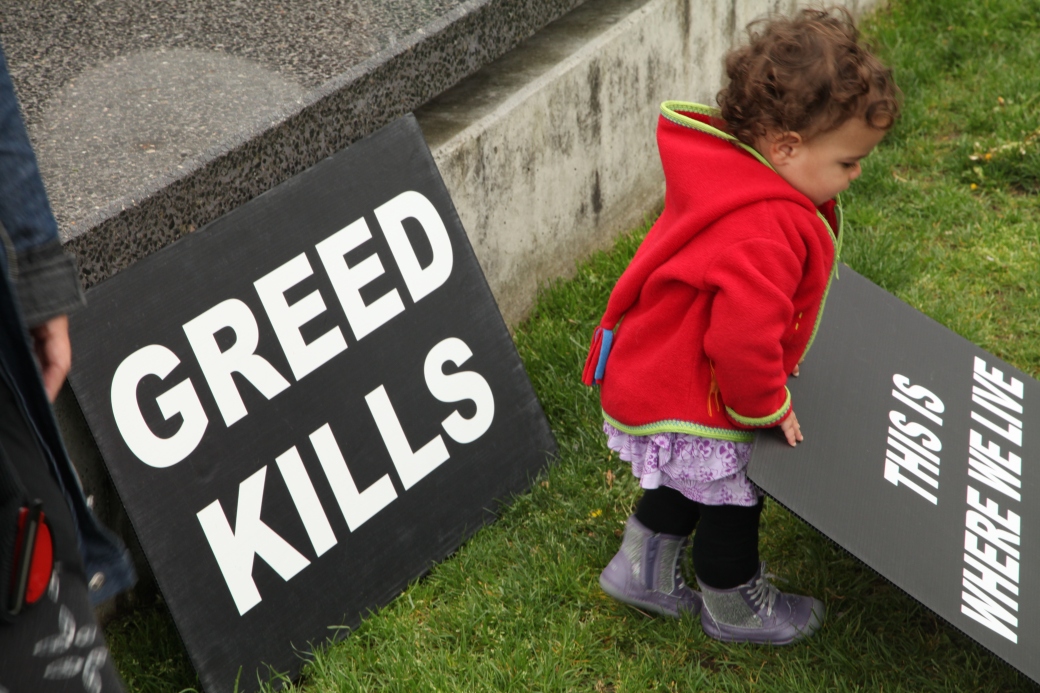 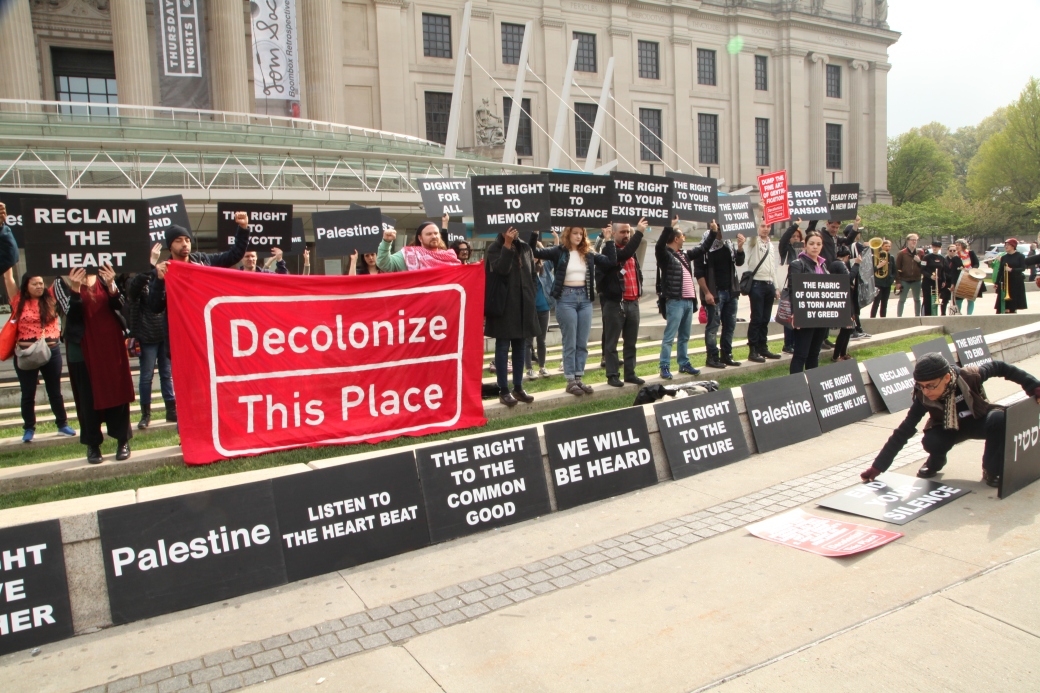 2 thoughts on “A Birthright Trip for Photographers? “This Place” at the Brooklyn Museum”